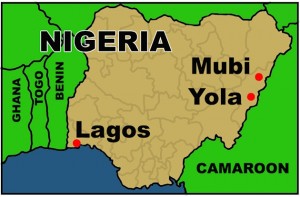 UPDATE: The following request was shared with MNN by World Mission’s Greg Kelley: “We need people to pray for this onslaught.  Also we need prayers for the WM team members that are being relocated to safer ground.”

Nigeria (MNN) — Last week’s Boko Haram takeover of Mubi, the second-largest city in Adamawa State, is creating a humanitarian crisis in nearby Yola. The black-flag Muslim terrorists have reportedly set their sights on Yola already, claiming it will be their next target.

“There are 300,000 refugees coming into the community of Yola,” says Greg Kelley, Executive Director of World Mission. Kelley says World Mission’s Nigerian ministry partners, who are headquartered in Yola, tell him the city now holds more refugees than citizens.

“It’s creating a real crisis on a humanitarian scale because these people are leaving with just the clothing on their back and their children underneath their arms, and that’s all they have when they arrive.”

World Mission is helping their partners provide food, shelter, and medical care for the refugees coming to Yola. According to The Guardian, a second refugee camp had to be constructed because so many Internally Displaced Persons (IDPs) were being transported to Yola from Mubi. 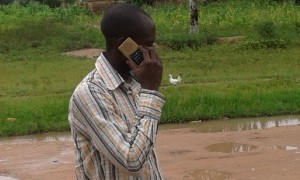 A man listens to The Treasure in Nigeria.
(Photo credit World Mission)

World Mission’s partners are also encouraging IDPs to hope, sharing with them an audio Bible called The Treasure. It’s a solar-powered device that can hold over 60 hours of New Testament Scripture in one of 5,000 languages.

Kelley says just one of these hand-held devices has the potential to reach hundreds of mostly-Muslim refugees. Crowded in IDP camps with little else to do, and a desperate need for hope, IDPs make a captive audience for The Treasure.

“So many of these people in northern Nigeria are oral learners,” Kelley explains. “One Treasure can impact hundreds of people as they’re all in these refugee camps listening to the Good News of Jesus Christ.

“What an amazing opportunity to share the Gospel and be the hands and feet of Jesus as we respond to this humanitarian crisis.”

World Mission aims to send 1,000 Treasures into northern Nigeria before the end of the year. Part of their goal has already been met, thanks to last week’s anniversary celebration. 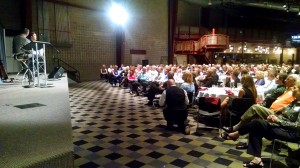 “We were able to raise the money for 1,000 Treasures, which will allow 150,000 people to hear the Gospel message for the first time,” says Kelley.

Since some of the Treasures funded by last week’s banquet are headed to Burma, the Nigerian project still needs assistance. You can help World Mission cross the finish line here.

Most importantly, keep praying for Nigeria.

Pray that Boko Haram’s campaign of terror can be stopped in its tracks. Pray that as refugees in Yola are introduced to Jesus through The Treasure, they will accept Him as Savior. Pray that World Mission will meet their goal of funding 1,000 Treasures by the end of 2014.