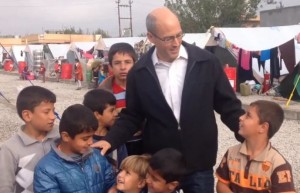 Winter is coming to the refugee camp.
(Photo by World Orphans)

Iraq (MNN) — Sometimes God’s call is so blatantly obvious, there’s no way you could refuse to acknowledge it.

For World Orphans, God’s call came through the name of their community center in Iraq. They called it “The Refuge” because it was a place for widows and vulnerable children to be ministered to in a holistic way. Little did they know that “The Refuge” would soon serve an additional purpose.

Scott Vair, president of World Orphans says, “Our primary desire is to equip, inspire, and mobilize the church to care for orphans and vulnerable children. And we do that around the world.” They partner with the local churches to support families who have taken in orphans. Vair continues, “I would say the most important part of what we do is form ministry teams at that local church that will go mentor, disciple, and love on these families that have taken in orphans in their communities.”

A large majority of their work occurs in Haiti, Ethiopia, Cambodia, India, and Iraq. World Orphans has been working in Iraq for the last six years.

In late August, ISIS activity forced World Orphans ministry families to leave the location in Soran, Iraq, for about two weeks. By time they came back, there were 2,000 refugee families in Soran who had fled their homes in Mosul.

When God led World Orphans to Soran, the mayor provided them with an acre of land in a neighborhood built for widows and orphans of husbands and fathers killed in conflicts in Kurdistan.

Since that time, World Orphans has maintained a good relationship with the local government.

“We chose to find ways to reach out to and care for these children by building a community center,” Vair says. Here they teach English and exercise classes as well as vocational skills. They have a library and a soccer field they rent out to adult soccer teams at night.

When the refugee families, coming from various religious backgrounds, arrived in Soran, the mayor asked for World Orphans’ help.

A third of World Orphans’ property was not being used, so they immediately began developing it. Soon they had enough tents to house 20 families.

Vair says, “We’re not primarily a refugee ministry, but we believe that God had us there for just such a time as this. In fact, a few years ago, we named our community center ‘The Refuge,’ and it seems only appropriate for us to open our doors to some of these families.”

The families living in this camp all know each other well. They come from a Kurdish background and are Muslim. Part of World Orphans’ ministry in any context–and the main goal–is to share the love of Christ with those who do not know Him.

“As you know…evangelism in a Muslim context is really relational-based, and it is a process,” Vair explains.

And it seems that they might just have the time for this. “We don’t think they’ll be able to go back to their homes any time soon,” Vair explains. “They heard from people that have been back that there are land mines in the streets in their village; their homes have been booby-trapped. It’s going to be some time before they go back. So our plans for their spiritual needs would be really to love them, first, and to care for them and to provide a place for them to be their temporary home.”

This camp is about 50 miles north of Erbil. Earlier this year, ISIS was within 15 miles of Erbil until U.S. airstrikes pushed them back. Vair says it would take an extreme amount of work for ISIS to get through Irbil to the camp. This helps them feel relatively safe even though they know ISIS is still on the move.

World Orphans is thankful to have been able to answer God’s call. He has blessed them from the beginning. Even though they are a registered Christian group, the local government of Soran has been supportive all the way.

But their work cannot continue without help from people like you. Vair says, “We would love to have people pray for us.”

While the refugee camp fits right into the organization’s vision or mission, it has been a stretching experience to learn how to provide for the refugees. Pray for God’s guidance as they navigate through this new operation.

The camp is also a stretch for the ministry financially. Not too long ago, the camp needed air coolers for the extreme heat. Now, as winter swiftly approaches, World Orphans needs help providing fuel for heaters for the families in tents. They also need food. If you’d like to help in this way, click this link.

Finally, pray for the hearts of the refugees to be softened. Pray for them to find comfort in Christ.