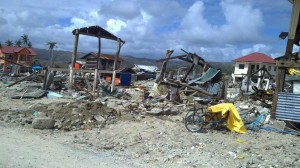 Philippines (MNN/EFCA) — Typhoon Hagupit has departed from the Philippines, but now the cost is being counted.

Houses and buildings have been destroyed. Debris covers the land.

Many Filipino workers from local Evangelical Free Churches (EFCA) are responding to the typhoon. Two of the workers, Francis and Che, saw that the cost of the typhoon wasn’t quite as harsh to the land as it was to the people.

They’ve been serving in San Mateo, where the Evangelical Free Church of the Philippines ( EFCP) has an outreach. They visited with church members and other people in the community.

One teenage girl Che spoke with said, “My heart felt helpless and weak…that we were going to end at that moment.”

Francis and Che were moved by the stories of many affected by the typhoon, which killed at least 27 people and affected more than 900,000.

Che said, “With them pouring out emotions, I just want to hug them, thanking God at that moment that they are still alive. And yet they call upon Him in their weakest and darkest moments of their lives. He made them a witness that they are his sheep and He is our shepherd.”

The vision is to help with the immediate relief needs, but to more deeply engage in several specific areas where God is opening the door for disciple-making and church planting activity in the process of responding.

P. Sam, one of the church planters in Eastern Samar, said, “Char, Biboy, and I went to see the damage in 5 towns up north of Borongan the other day. For church planting, I think we can consider maybe one or two barangays in Borongan and the town of San Julian, north of Borongan. We have a church member in one of our outreaches in Borongan who has Bible training to lead a ministry in one or two new areas.”

The churches planted are forming strong foundations to be an effective and compassionate response.

P. Sam said, “My heartfelt gratitude for your continued support to our churches and people of Eastern Samar as we face these chains of calamities.”

Click here to donate for immediate relief needs and the ongoing response and outreach of ReachGlobal.