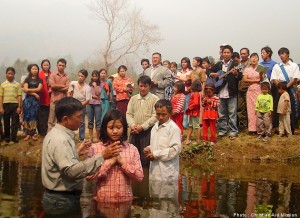 In Burma (Myanmar), poor ethnic villagers in the predominantly-Buddhist country are usually too busy trying to eke out a living to listen to gospel presentations, but one native missionary reached a remote village where hundreds of people listened to him for three days.

It took two days, usually on very hazardous and steep roads, for Pastor George* and his team to arrive at the village that had around 300 homes.

As villagers spend most days cutting down trees to make clearings for hillside cultivation, the only explanation Pastor George had for the welcome he received was the work of the Holy Spirit. “Usually the villagers are very busy every day,” George said. “However, I praise and thank God, because during our ministry, which lasted three days, no one went to work, and 300 people listened when we preached the Word of God.”

People from six other villages also came to the evangelistic meetings.

“I was able to preach and propound the Word of God from 10 a.m. to 10 p.m.,” George said. “God saved 20 people and restored more than 40 people who were backsliding. There are many nominal believers and those worshiping evil spirits in the village, and some of them were brought closer to God.”

Indigenous evangelists have been carrying the torch of gospel proclamation in Burma since the regime expelled all foreign church workers in 1966. Operation World notes, “Momentum in evangelism is building as an indigenous missions movement begins to flourish.” Christians now account for about 9% of Burma´s population.

With a poverty rate of 73%, sparsely populated Chin is the poorest state in a resource-rich country mired in government corruption and mismanagement. In a country where most people survive on the equivalent of one U.S. dollar a day, Pastor George´s ministry is planning to provide a rice bank for the village; the ministry seeks $4,000 to buy rice that it will then sell to villagers at a low price.

“Especially in the rainy season, they cannot go out to buy rice because of bad transportation or the roads,” he said. “This will allow the poor people to buy and eat rice. So, pray for funds for a rice bank.”

Some of the villages don’t have enough clean water, and the ministry would like to provide pipes and a water tank to transport water from natural mountain springs at a cost of $5,000. George also said a nursery school seeks $1,000 in supplies and upkeep for one year, and that $2,000 is needed for tuition and food costs for 35 poor teenagers to attend high school.

“Pray for all the people in Chin state to receive the gospel and be redeemed and saved,” he added, saying two evangelistic campaigns cost about $1,000.

In spite of democratic reforms, a new constitution, and a civilian president, the military junta that ruled Burma for decades still exercises influence. The separatist movements growing out of long-denied promises of autonomy for Burma’s ethnic regions are still fighting government forces. Among the separatist militias are those of the ethnic Karen and Chin, which the government regards with particular anathema since they are largely Christian. Using religion as one way to build uniformity, the government encourages the Buddhism of the majority and sees Christianity as divisive.

The government tacitly supports atrocities against Christian civilians in war zones. Most recently soldiers from the Burma Army reportedly gang-raped and killed two women, 20- and 21-year-old teachers working for the Kachin Baptist Convention, in Shan state the night of Jan. 19 and early hours of Jan. 20.

“Villagers nearby heard the girls screaming, and when they went to check, they saw Burma Army boot prints and the raped and bloodied bodies of the dead girls,” CSW reported. “The church members went to the Burma police in this area, but the police have taken no action.”

Since the Burma Army broke a 17-year ceasefire in its conflict with the Kachin Independence Army (KIA) in June 2011, the Kachin Women’s Association Thailand has documented more than 70 cases of gang-rape, rape, and attempted sexual violence by Burma Army soldiers in Kachin and Shan states.

The fighting between the KIA and the Burma Army has taken place in Kachin state as well as northwestern Shan state. A ministry assisted by Christian Aid Mission in Shan state is planning to build a house where refugee children from the fighting can live, as well as obtain schooling.

“We have some children from civil war victims,” said the director of the indigenous ministry working in the undisclosed village. “We are praying for a small piece of land to build at least a wooden house for the children to live in and go to school.”

“We pray to build a 48-ft. x 20-ft. house, because we want to accept more children,” the ministry director said. “If we can have our own land and have a building, then we will accept more children from the Kachin border. Right now we have four children.”

A water well about 500 feet from the proposed site would supply the children’s needs, if the land sought can be purchased, and a water tank will also be required. A source for electricity is also about 500 feet away from the site, and the ministry would need to apply for a meter box, buy a cable and post, and install it, all for a cost of about $800.

You can bring support to indigenous missionaries in Burma by clicking here.