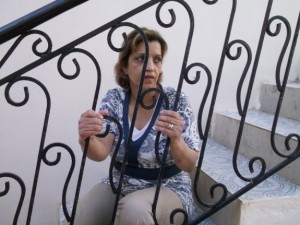 Middle East (MNN) — Civil war, the rise of Islamic State, and the ineffectiveness of reformist governments made last year one of turmoil for the Middle East and North Africa.

More than any group, it seems like women were cheated out of their hope for change in Arab Spring countries.

Debbie Brink is the executive director for Women for Middle East Hope (WFMEH), a specialized arm of SAT-7. She explains, “Women were coming alongside people in the streets. They wanted to see change for themselves, but it sadly didn’t produce what they had wanted. In fact, as I’ve looked at different reports and studies since then, conditions have gotten worse for women in the Middle East.”

Under more totalitarian rule, coupled with the rise in extreme Islam, women were soon marginalized, their voices silenced. Knowing their stories and speaking up for them is one reason SAT-7, a Christian satellite television ministry to the Middle East and North Africa, launched WFMEH as an international initiative.

It was meant to address the plight of women a world away who suffer from oppression, fear, and lack of hope. Brink says, “If women in the West understood more of the issues concerning women in the Middle East and North Africa, they would want to get more involved with us, in helping us provide specific television programming for the women in the region to help them cope with issues that they deal with.”

Women for Middle East HOPE believes that increased exposure to the love of Jesus Christ will affect real change in the hearts of women and men across the region, as old attitudes, values, and ideas gradually move into alignment with the Word of God. 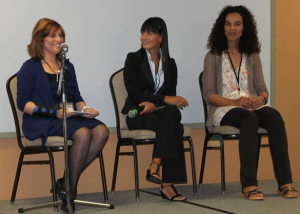 Here’s how it works: participants will begin by educating themselves about the socially-challenging realities facing women and children in the Middle East and North Africa.

From there, the sky’s the limit. Women can participate in study programs, individually or in groups, or travel to the Middle East with other concerned women to engage with the women of the region and to understand how Women for Middle East HOPE can help meet the challenges they face.

She goes on to say that just like in North America, not everyone participating in church or in a program may actually have a personal relationship with Christ. The same is true of the Middle East. However, Brink says, “The reality is that the majority of the region is not Christian, and they are watching our programs. So, the ones that aren’t Christians don’t feel like they’re being attacked or criticized because that’s not our purpose. But they become curious about ‘what do Christians really believe?'” 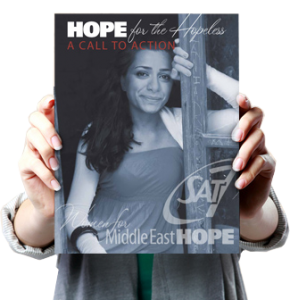 Segments of SAT-7’s television programs for men and women contrast the culture of injustice with biblical concepts of freedom and forgiveness. “They listen and they become intrigued, and they begin to think, ‘This isn’t the Jesus that I had always heard about.’ They want to know more, and they continue to watch.”

Because roughly half of the women in MENA are illiterate and house-bound, they spend much of their day watching television. Satellite television programming is the perfect medium to transmit information.

Click on the highlighted links if you want more information about the WFMEH ministry and SAT-7.