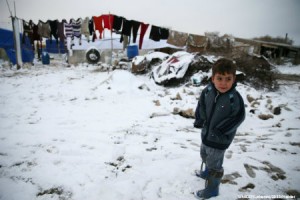 Syria (MNN) — Winter is fast approaching in the Middle East.

No surprise there, except now, there are 10 to 12 million displaced people and refugees who have fled from Syria and Iraq. Already stretched thin, the World Food Program says that if pledges from the international community don’t come in, some of these refugees will be facing winter on 825 calories per day.

To put that into perspective, a typical peanut butter and jelly sandwich on white bread (an American-specific phenomenon) has roughly 376 calories, 13 grams of protein, and 3.5 grams of dietary fiber. It’ll work for a little while, but nutritionally, it’s close to a starvation diet. The average middle-aged adult aged 31-50 years old needs between 1,800 to 2,200 calories to stay healthy (according to WebMd.com).

That’s the total for breakfast, lunch, and dinner…in the kind of weather where you’re basically exposed to the elements, and that’s what’s facing many of these IDPs and refugees in just a few weeks if nothing changes.

Jeff Palmer with Baptist Global Response says the influx of IDPs has overwhelmed already-strained resources. “It’s sort of like trying to plug a leak in a dam. You get your thumb in one place, other places begin to come out. So I think we’ll be doing some of the same things we’ve been doing over the last couple of years. The problem and the challenge that we face: there are so many other refugees that it’s just massive right now.” 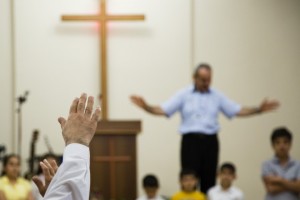 Global response to the refugee crisis from Iraq and Syria has been overshadowed by the security threat posed by the Islamic State of Iraq and Syria (ISIS) invasion. Palmer offers his own speculation surrounding the lackluster response. “It’s ongoing. It’s been a long-term thing. People are just getting tired of it. Another reason is the perception of ‘there’s a lot of bad people in that part of the world.'” It’s small comfort to the hundreds of thousands in Northern Iraq fleeing into Turkey with ISIS in hot pursuit. “They didn’t even have an idea of what country they were in. So, there’s so much happening. It’s war.” Palmer says shock doesn’t register on the global scale. Neither does a man-made crisis.

The numbers are staggering. The United Nations’ latest reports reveal a huge movement of people. It’s the tip of the iceberg, confirms Palmer. “For every one you find in a camp, you’re finding eight or nine outside the camp. They’re living in tents, they’re living in schools, and they’re living in makeshift places, abandoned buildings. It’s finding those areas that nobody else is helping.” The families being helped are Kurdish Yazidis and other minorities, as well as Iraqi Christians, some of whom are members of the response team and were themselves forcibly displaced from their own homes.

Last winter was hard. People were exposed to the elements. This winter, the partnerships are in place, but the funding won’t cover all of the needs. “We’re going to need better tents, we’re going to need winterproofing. We’ve got some actual teams that are doing that, going in and working alongside our national partners.”

In addition to food baskets provided by Global Hunger Relief, BGR is also distributing coats and rubber boots, blankets, mattresses, and carpets to isolate the cold, as well as heating stoves and fuel. Palmer says this is what emerges from an aid initiative that connects the body of Christ: “It’s amazing to see the response and the love of Christ in the local people who want to help their fellow countrymen and others, even though they’re suffering in the midst of it, themselves.” 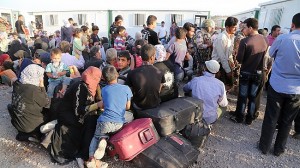 Every bit helps. The spiritual front needs cover, too. “Pray that some sort of stability will return to the area. Pray for our national partners who are standing strong in their faith, helping people and sharing their faith. Pray for them to be bold as they stay in some very dangerous areas.”

One last thought. Palmer acknowledges that numbers overwhelm and distance numbs. But coming alongside the body of Christ in these areas, resourcing those who are acting in the name of Christ, is what characterizes the Christ followers. For that reason, “Don’t be discouraged in well-doing. Continue to support organizations like Baptist Global Response. I think we really are making a huge difference.”