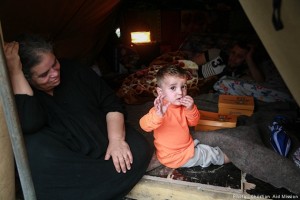 Middle East (CAM/MNN) — Winter has become a brutal enemy to refugees in the Middle East. Missionaries told Christian Aid Mission, your link to indigenous missions, that winter has started to claim lives among people from Iraq and Syria who fled the Islamic State and other militants.

Last week a 2-month-old baby girl named Layla froze to death. “A little baby died because of the cold,” said the director of a ministry for Syrian refugees in Turkey. “It’s mauling me even more because I have seen the babe with her mother in their tent. Please pray for us so we can do something for them.”

A leader of a ministry in Lebanon’s Bekaa Valley also reported a fatal cold last week. “Last night a 4-year-old child died, frozen near the school,” he said. “Please pray with us for our brothers in the Bekaa Valley of Lebanon who are facing very low temperatures. Please pray for the school, as well; we are closed because we cannot heat the classrooms.”

The United Nations High Commissioner for Refugees (UNHCR) has warned that winter could bring crisis conditions to up to 1 million people displaced by civil war in Syria and ISIS in Iraq. Christian workers in centers for people from both countries have begun to see their worst fears come to pass.

“Winter is painful and has disastrous effects on the displaced, especially those living in tents and uncovered buildings still under construction,” said the director of a ministry working in camps for displaced people in two cities in northern Iraq, Erbil and Dohuk.

The Iraqi ministry director said some people cannot move from tents into buildings due to unavailability and high rent costs. Those that can often end up in buildings that do not have heating or panes in their windows, and they are overcrowded.

“It certainly is not that easy. The number of families living in one house or apartment is between 10 and 20, and this matter carries painful consequences,” he said. The need for electric heaters, kerosene-fueled heaters, and kerosene is “very urgent,” he said. “This bad weather weighs most heavily on the chronically ill.”

Christian Aid reported that a ministry director found children wearing sandals in the frigid temperatures. “We bought shoes with all the rest of the money we brought with us,” he said. “There is really much pain and suffering. Babies are sick all the time, and the deaths have started to rapidly increase, unfortunately.”

Refugees have suffered greatly and for so long, but it’s deepened their faith in Jesus. One refugee said “I have more faith now in Jesus. We are ready to die for our Christianity. We decided to leave because we didn’t want to convert.”

A pastor in the camps told Christian Aid, “The people in the churches have said, “We used to hear preaching from you that God as a Father takes care of His kids, but now we are living it. Today we have trust in the Lord more than ever. The Lord did not leave us.’”