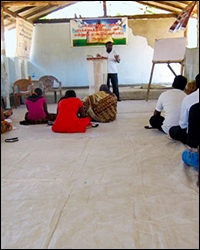 Sri Lanka (MNN) — Hardship and civil war have oppressed Sri Lanka for 25 years. Even when war ended in 2009, many were fighting battles of their own, particularly for freedom of religion. But those dark days seem to be waning, opening doors to sharing the truth, and Christian Aid Mission wants to take full advantage of that change.

Lacking Freedom of Religion
Sri Lanka is declared a secular state, but the majority of the population is Buddhist. Open Doors UK reported that according to constitution, religious minorities have freedom of religion; however, the government has enforced laws where groups must receive letters of registration issued by the Ministry of Buddhist Sasana and Religious Affairs to worship.

At #44 on the Open Doors World Watch List, the South Central Asian country stands as a symbol for Christian persecution.

Voice of the Martyrs reported that Christians have been discriminated against in employment and education situations. According to Open Doors UK, at least 60 violent incidents of persecution took place in 2014–many of which were led by Buddhist monks and radicals supported by the government.

Peace on the Rise
According to the International Mission Board, President Maithripala Sirisena was elected in an unexpected upset. And while many were braced for violence, peace was a welcome surprise.

The new president is taking a step back to deal with the country’s past, including persecution and discrimination against the Tamil people–many of whom who were in refugee or internment camps after the civil war. President Sirisena has promised to give the people freedom to move and is giving back most of the land the government obtained from them.

IMB reports, “Many remarked that in their lifetime, they have never seen this kind of peace in Sri Lanka.”

Key Timing for the Gospel
It would seem that now is a key time for spreading the Gospel further, but the overall population of Sri Lankan Christians is remarkably small. According to Joshua Project, 1.2% of Sri Lanka is Christian.

With your help, an ministry supported by Christian Aid hopes to send three more indigenous Christian workers to reach new areas that have yet to hear about Christ. Help sponsor these workers, by clicking here, and scrolling down to April 20.