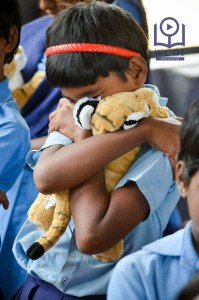 India (MNN) — When a child’s world is turned upside-down, there’s nothing more soothing than a furry friend to hold and the assurance that “everything will be okay.”

“When you are a victim of trauma, or a kid who has been abandoned, the most amazing thing you can do is provide them a ‘stuffed reminder,’” he says.

“You know, something they can physically hold on to because they have just been yanked away from anything that has been near and dear to them.”

Sundararajan and two short-term mission teams spent the last few weeks delivering 300 Wildlife Storytellers to vulnerable kids in India. Some were abandoned in the streets, others were victims of human trafficking. 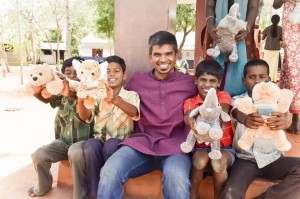 JP Sundararajan with some of the boys who received Wildlife Storytellers.
(Photo courtesy ASM via Facebook)

No matter their background, each child experienced a new phenomenon in receiving a Wildlife Storyteller.

First of all, “most of these kids have never, ever owned a stuffed animal of their own,” Sundararajan explains.

Secondly, each of the Wildlife Storytellers holds a promise of hope that extends beyond today.

As kids listen to recorded Scripture and Bible stories, they’re reminded that “they are not just an abandoned child, but they are children of God.

“There is a God who loves them and who cares for them.” 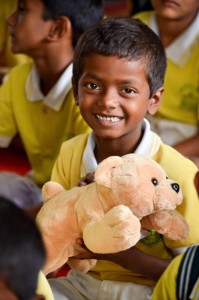 Wildlife Storytellers haven’t been a primary focus in ASM’s past, Sundararajan admits. But, that doesn’t mean it’s going to stay this way.

“The potential for this to ‘go big’ is there,” says Sundararajan.

Abandoned children and orphans are an easy target for traffickers, and India has the world’s most child workers, according to UNICEF. In addition, India holds around 20 million HIV/AIDS orphans.

Even if kids are rescued from danger and put into a safe living situation, many basic needs remain unmet. Can you help ASM provide a simple gift of comfort?

“I would love to send about 1,000 more in the next couple of weeks; maybe in the next month or so,” Sundararajan shares, lamenting that ASM’s teams could only give Wildlife Storytellers to a small portion of the children they visited.

“We would love to make sure that when we come back to this place, every one of these kids gets their own stuffed animal.” 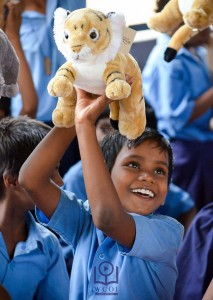 “It costs about $30 per stuffed animal, [and] that’ll include the shipping, the cost of the animal, and everything else,” explains Sundararajan.