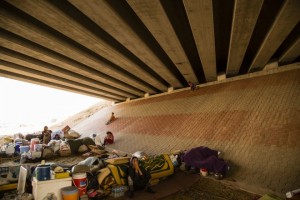 Iraq (BGR/MNN) — With all the discussion about the terrorist group sweeping across Iraq and Syria, you might be wondering what to call it.

Abraham Shepherd, the area director for Baptist Global Response work in the Middle East, says, “The correct name is ISIS, if you want to be correct from a political perspective.” He adds, “The government and politicians refuse to use that because by referring to them as that [Islamic State], you’re acknowledging the fact that they are a state. People don’t see them as a state: they see them as a criminal, terrorist group.”

Either way, they represent fear. Hundreds of thousands fled before the onslaught into the Kurdistan region of Northern Iraq with ISIS in pursuit. Once Iraq refugees arrive, “They find an abandoned building, or under a bridge, in a park or in a school. The Kurdistan government postponed the start of school until they find a permanent solution for many of these people.” Shepherd says in their new life, the survivors are unmoored. They’re in shock, unused to the squalid conditions they find themselves in. “We’re talking about 60 to 70 people in one room, crammed together. These are people who had a normal life. They had their own businesses, their own cars. They’re intellectual, educated.” 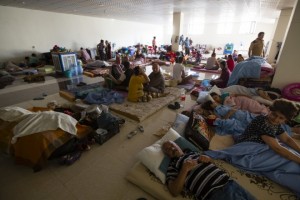 “Overnight, they have nothing but the clothes on their back. And so BGR is there to provide the basic necessities of life, to let them know that we care, [and] there is a bigger body that really loves them and cares about them.”

Resources from Global Hunger Relief (GHR) are comforting these families and hundreds of others like them, as BGR and its partners deliver relief supplies where people have taken refuge. GHR funds are providing crucial supplies–water, food, and infant formula–that help these families survive. Southern Baptists across North America will replenish those funds when they observe World Hunger Sunday on Oct. 12.

More than they want food, forcibly-displaced families in northern Iraq want to talk about what they have endured at the hands of ISIS extremists. Then, they’re asking others to “Tell their stories. Tell the stories: these people have names. They have a story. They have pain.” 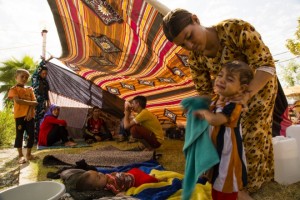 The people in need are Iraqi Christians, Kurdish Yazidis, and other minorities. And they have heartbreaking stories to tell:

– In one village of 700 people, only three made it out alive.

– Children and old women found abandoned in the mountains.

– A man carried his crippled brother for 16 hours, with blood oozing from his foot.

– A man in his 60s, wearing pajamas, paces back and forth, asking constantly: “Where should I go now? What should I do? Can this happen? I worked all my life, with only a year left to retirement, and now without job income or pension. What can I do at my age?”

– A woman in her late 40s named “Faithful” sent her husband and boys away when radical Islamists threatened them. She stayed behind in their village with her two daughters. While she was away from the house one day, masked men broke in and threw a bottle of gasoline on her oldest daughter, Rita, who was 23. Rita survived one month in the hospital, and Faithful took care of her around the clock. One night, she held Rita and sang lullabies to her. She talked to her about one day being healed, marrying, and having children. Rita asked for water, then said, “Mom, please forgive them,” and passed away in her arms. She died on Good Friday–the “Friday of suffering” in the Middle East.

“Even though Faithful is forcibly displaced, she is helping other forcibly-displaced people, saying: ‘God gave and God took. May He be glorified,’” Abraham said. “As we left, she asked us to make her story known, so this will not happen to others, and that’s what I’m doing.”

Abraham has been able to train relief workers from other teams in other cities and has been impressed with their desire to help everyone, regardless of who they are.

The greatest needs among the forcibly displaced are for blankets, food, water, propane burners, pillows, mattress, wheelchairs, carpets to isolate the cold and provide some comfort, baby formula, and health care, Abraham said. These are people created in God’s image and loved by Him. Meeting the emotional and physical needs is the first step to talking more about that Love.