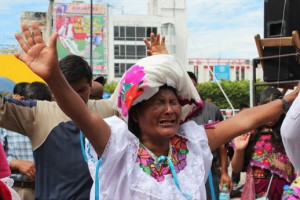 International (ODM/MNN) — In 2014, the persecution of Christians around the world reached historic levels. It begs the question: what will 2015 bring?

Open Doors just released its annual World Watch List, which ranks the top 50 countries where it is most dangerous and difficult to be a Christian. As the data was compiled, researchers looked at several dynamics, says David Curry, president and CEO of Open Doors USA. “We’re looking at private life; at family life: what is it like for a Christian in their family if they convert; then, the community: will you be able to keep your job? Is the government itself attacking, setting laws, using zoning and other things to attack Christians? Then, are Churches communicating? Are churches supporting each other?”

Topping the 2015 list for the 13th consecutive year is North Korea. No surprise there. However, three newcomers joined the 10 worst countries in which to be a Christian: (#4) Sudan, (#9) Eritrea, and (#10) Nigeria. Somalia rose to rank second. Curry says, “These issues in Nigeria, with Boko Haram, Sudan. A lot of times, you have what you have in Somalia, which is essentially an ineffective government, a failed state. In the midst of that, you have Islamic extremism.” 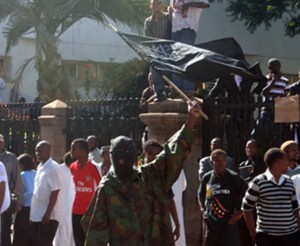 Based on that, it seems Africa saw the most rapid growth of persecution, while the Middle East saw targeted attacks, resulting in a mass exodus of Christians. “Iraq and Syria: both affected by the Islamic State. Totally different political situations there, but it has created a leadership vacuum. And then at #5, you have Afghanistan.” Why these areas? “There is a culture there within the ideology of extreme Islam, which will force families to bring pressure, even violent pressure, on a member of their family to re-convert.”

One country that has been the second or third worst country on the WWL for the last seven years fell to the twelfth spot. Does that mean Saudi Arabia improved that much? Sadly, Curry says, “No.” Rather, “It has more to do with the violence that’s happened and the pressure that’s risen in the other countries.”

Approximately 100 million Christians are persecuted worldwide, making them one of the most persecuted religious groups in the world.

But, what is persecution? Open Doors defines it this way:

Christian persecution is defined as any hostility experienced as a result of one’s identification with Christ. Recent examples include imprisonment, torture, beheadings, rape, and loss of home and assets.

While violent persecution is most often reported by media, nonviolent persecution is also on the rise. Violence has increased dramatically in Iraq, Syria, and Nigeria, but Christians in other countries are experiencing persecution in their personal lives through family, community, and national spheres of life. Christians are often ostracized by family exclusion, the loss of a job, or even rejection from a community.

The goal of the annual WWL, explains Curry, is “to keep Christian persecution on the radar of those enjoying the privileges of freedom. The perpetrators of persecution need to know that the world is watching and stands in opposition to persecution. And for the persecuted, we want them to know that they are not forgotten.”

Yet, the persecution of Christians is greeted with lukewarm response throughout the North American Church. “The Bible talks about persecution. The New Testament was written by the Persecuted Church,” says Curry. “So we need to be with each other, supporting each other in every way we can.”

Curry warns, “There are incidents now where Christian faith will be under attack in the United States, so it may come to you. That’s one reason why Christians need to care.”

What can you do? Stay informed. Share the stories with other Christians. Pray.

THE TOP 10 COUNTRIES WHERE IT IS MOST DIFFICULT TO BE A CHRISTIAN ARE: