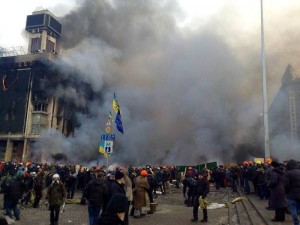 Ukraine (MNN) — Though yesterday was Ukraine’s 24th Independence Day, the country is still fighting for freedom.

“The sad part is: no matter on which side you stand, there are people who are caught in the middle who are suffering. There are people that are desiring freedom, and their freedoms are being taken away.”

The once-very-free country has been fighting to keep and regain control from Russia and Pro-Russian rebels since fighting started in April 2014.

“We stand for peace, but we are not pacifists,” Ukrainian President Petro Poroshenko said during his Independence Day speech.

“We must get through the 25th year of independence as if on brittle ice. We must understand that the smallest misstep could be fatal. The war for independence is still ongoing.”

Poroshenko pledged more troops to be sent to Eastern Ukraine.

More than 6,800 have died since fighting began, according to the United Nations. And right in the middle of this fighting are civilians who have been maimed or killed simply by taking a step out of their house.

Why Civilians are stuck in war-active areas

Around 1.4 million people have fled Eastern Ukraine and taken refuge in the West, Belarus, and Russia. But many are stuck in war-active areas.

“Most of the families that have remained in these villages are either disabled, elderly, or incredibly poor,” explains Mock, explaining that only the “young, mobile families” have had the means to leave.

“The people that remain were already the marginalized or the poor within the community. Now they listen to gunfire and artillery constantly.” 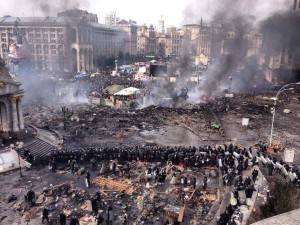 Because of the ongoing war taking place just outside their doors, families don’t leave their house very often, which means they struggle to get supplies or food. They’ve become unacknowledged victims.

“The devastation there is pretty pronounced. There are people that are lacking of medicine, lacking of water, food, and sometimes lacking in any kind of shelter,” Mock explains. “There’s really a different circumstance in there, and the amazing part, by God’s grace, is there are churches that God has raised up to be His witnesses both in action and in word.”

SGA and churches taking a role

Families stuck in dangerous areas are looking to local churches and SGA donations to bring support and encouragement.

While bringing food and supplies, church members also bring the message of God. In one certain town, members come every week to hear a sermon, searching for hope and giving truth.

But, it’s not as easy as it sounds.

“The church members that help with these projects actually put on body armor and drive into areas within the range of gunfire and artillery. They’re delivering bread to people that absolutely do not have access to adequate food and medical care.”

Mobs of people have started coming to SGA vans, looking for and depending on food and supplies.

Earlier this year, Mock had the opportunity to share with an Alaskan church how families in Eastern Ukraine are being affected by the crisis. After speaking, a young girl named Charlotte handed him a crumpled $10 bill and told him she knew it wasn’t much, but she wanted it to go to the families.

“It’s amazing to see a young life care so much for other people,” Mock said. 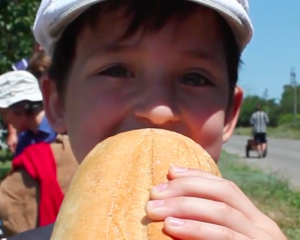 Until she received a video, little did Charlotte know her money donated 50 loaves of bread to Ukrainian families stuck in dangerous areas.

It’s people like this who are doing small things to make a big difference.

While fighting continues and Poroshenko calls on more troops to work toward freedom, Mock says we need to pray for the church, which is struggling because so many people have left the area.

“Rather than me taking a stand on pacifism versus open war to defend the freedoms, might I instead direct the call back to the power of the local church to reach the people in their community.”

Will you provide for suffering families stuck in Eastern Ukraine? Just like Charlotte gave $10 and provided 50 loaves of bread, you can do the same. Click here to supply food and encouragement in the name of Christ.