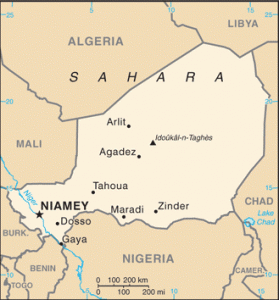 Niger (CAM) — When protests against depictions of the prophet of Islam in a French satire magazine emerged across some of the most hardline Islamic countries this month, the West African nation of Niger was not on too many people’s radar. It is now.

Rioting Muslims vented their anger at Charlie Hebdo magazine and France over the weekend of Jan. 16-18 by killing Christians and burning church buildings and other Christian institutions, including medical clinics and an orphanage. Violence in the country with a 98% Muslim population that had lived in relative peace with its tiny (0.3%) Christian minority for decades pointed to extremist elements that analysts have long suspected.

There are signs that there could be future incidents.

“There have been rumors of people going around marking Christians’ houses for further attacks,” a ministry leader native to Niger wrote to concerned parties on Tuesday (Jan. 20). “Later in the night, we received several phone calls from local Christians and missionaries that confirmed that their houses were marked. Please continue to pray for the very insecure situation in Niger.”

Analysts say the rise of violent Islamist groups across Africa, such as Boko Haram (supported by Al Qaeda in the Maghreb) in neighboring Nigeria, have fed the growth of radical elements in Niger. They theorize that Islamic extremist groups were an important factor in Muslim Nigeriennes, shouting, “Kill the infidels, kill the Christians,” burning 72 church buildings and killing at least 10 people.

“The Charlie Hebdo saga has become an opportunity for attacking Christians in Niger, an Islam-dominated country which has been praised for its secular government and relative tolerance towards Christians,” Christian support organization Open Doors reported. “Over the past few years, the country has seen growing radicalization.”

While protests raged across countries with high-profile Islamic extremist elements like Somalia and Pakistan, the violent response in Niger was surprising. Niger was unranked on the Open Doors 2015 World Watch List of the worst persecutors of Christians.

“Also this morning, we learned of the Assemblies of God church being destroyed; this has very close proximity to the new office building,” he added. “Today we have many blessings to count, one of which is the fact that our church was spared.”

Besides Christian targets, angry Muslim youths also looted shops, attacked police stations, bars and hotels, as well as businesses that were either owned by non-Muslims or linked with France.

Following the Jan. 7 shooting deaths of 12 editorial staff, workers, and police at Charlie Hebdo offices by two Islamic extremists avenging cartoon depictions of the prophet of Islam, the periodical published a cover showing a weeping Muhammad carrying a sign with the slogan (“I am Charlie”) that had quickly come to signify solidarity with the victims and free speech.

Depictions of Muhammad of any kind are forbidden in most strains of Islam, and key schools of Islamic jurisprudence prescribe death for defaming him.

Among the dead from the attacks in Niger were at least three Christians trapped inside church buildings. Another leader of the ministry assisted by Christian Aid Mission condemned the violence.

“Of what crime are the churches and Christians of Niger guilty?” he said. “We condemn these disturbances and deplore the loss of human life and the high number of injuries among the innocent citizens they attack.”

The ministry leader in Niamey said he and other church leaders did not witness further demonstrations on Monday (Jan. 19).

More than 170 people were injured, officials said, and the scale of the rioting suggested other factors contributed to the chaos besides a magazine cover. Rioters also expressed anger that Niger President Mahamadou Issoufou participated in a unity march in Paris against the attack on Charlie Hebdo. Analysts also pointed to the violence beginning in Zinder, where there is a strong opposition to the ruling party, suggesting political rivals were stoking the fires following the president’s presence in Paris.

The hand of Islamic extremist groups was suspected, and officials were said to be investigating whether Boko Haram of neighboring Nigeria was involved. Boko Haram leader Abubakar Shekau is from Niger, and Boko Haram flags appeared amid the chaos.

While the majority of Niger’s Muslims may not have approved of Charlie Hebdo’s depiction of Muhammad– including President Issoufou, who emphasized that he was marching against terrorism and not supporting the magazine, most did not seem sympathetic to the scale and degree of the riots. Many Nigerienne Muslims helped Christians who were fleeing in terror.

“I look forward to the fact that next month, I have the opportunity to meet each and every Muslim who aided the safety of God’s people in Niger and to thank them,” said one leader of a ministry assisted by Christian Aid Mission.

He likened those who attacked to those who crucified Jesus, saying Christians must forgive them because they knew not what they were doing.

“Just as Jesus was wrongly condemned and tortured, so were the Christians in Niger. But I wholeheartedly believe that they [the assailants], too, ‘know not what they have done,’” the ministry leader said. “So, as Jesus made the bequest to the Father, I too plan to forgive these people.”