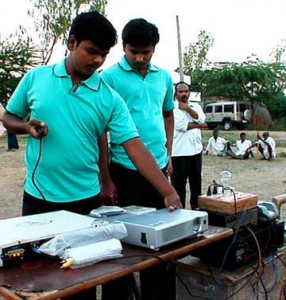 (Photo Courtesy of Gospel for Asia)

South Asia (GFA) — [EDITORS NOTE: This is an article from Gospel for Asia about the work God is doing with through their film team.]

The Man on the screen touched lepers, and they were healed. He fed thousands with only a few loaves of bread. He prayed for the sick and the blind, and they recovered. The villagers saw Jesus’ love on display, and they had never seen anything like it.

Eight people sat with rapt attention, tears streaming from every eye as the Roman soldiers crucified Jesus on the cross of Calvary. One might think it was a small crowd, but the entire village of Snikithati had come out to watch the film that night. It was a film that had come to them after a unique chain of events–and a faithful team of brothers willing to follow God wherever He would lead them.

Several days before, a much larger crowd of people in the nearby village of Jigishati had gathered to watch the same film, Man of Mercy. The Gospel for Asia film team put the finishing touches on the setup for the evening. Speakers: check. Projector: check. Screen, DVD player, DVD: check. Everything was good to go. GFA missionary Raahi and the rest of the film team prayed before starting the show.

About halfway through the movie, a few villagers angrily approached and demanded Raahi leave Jigishati, even though he had gotten permission from the village leaders to show the film. The film team packed up their equipment and left, but they continued to pray for the people of Jigishati village. Soon, some villagers approached them. They asked Raahi if he could come back and show the film in its entirety.

Raahi saw this as an answer to prayer, but once again, halfway through the showing, a few angry villagers told them to leave. Once again, the team packed up to depart while a man named Harshal looked on.

Harshal was visiting Jigishati village the day of the second film show. It grieved him to see how the people of Jigishati village treated Raahi and how they interrupted the film show. Harshal, who was sympathetic toward Christians, wanted to know more about Jesus. He decided to ask Raahi and the team to visit him in his village, Cholanoor, and show the film there. Raahi gladly agreed, and they set a date for the showing.

When the team arrived in Cholanoor, they found that Harshal had already done most of the preparations for the showing. In his excitement, Harshal had invited the village to the film, set up posts to attach the screen and even strung out wires to provide electricity.

Among those crowded around the screen that night was a couple named Dalpati and Daya. Their 12-year-old daughter had been suffering from a fever for 15 days with no cure in sight, though they had taken her to see many doctors.

As they watched Jesus heal the blind, touch the lepers, and cast out demons, God gave Dalpati and Daya the faith to trust Him for their daughter’s restoration.

After the movie ended, the couple approached the film team for prayer. Raahi encouraged them from the Word of God and prayed for the girl’s healing. When God touched her and restored her to good health, Dalpati and Daya decided they wanted to know more about this Jesus who heals.

But that wasn’t the only thing God did that night.

A man named Krishanu, from the neighboring village of Snikithati, watched the film in Cholanoor that night. Jesus’ love and compassion inspired him, and he thought of the men and women in his village. He wanted them to understand more about Jesus, too, so when the film was over, he approached Raahi and asked him if it would be possible to show the film in his village as well.

Witnessing Jesus’ compassion and crucifixion brought tears to the eyes of every soul in Snikithati.

Today, believers from Jigishati, Cholanoor, and Snikithati are worshiping Jesus and telling others of His great love, while Raahi and the film team continue to minister and bring Christ’s Good News through film. The Lord is using film teams to touch countless men and women who did not know His love, whether in a village of hundreds or a village of eight.

You can equip more film teams like Raahi’s and enable them to reach people in the most remote villages with the love of Christ. Click here to contribute toward a new LCD Projector.