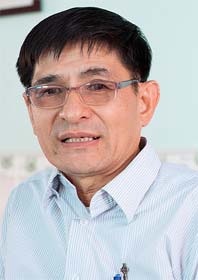 Vietnam (MNN) — What does it look like to be a brave soldier for God? When you’re pushed down again and again, but you refuse to give up or give in.

Vietnamese pastor Nguyen Hong Quang has been beaten and arrested multiple times in recent years. Sadly, both he and his son have been beaten again.

Pastor Quang and his son were attacked by a group of seven, then joined by 20 more men. Two additional pastors tried to intervene in the beating and were also hurt in the process.

This took place while police looked on and did nothing to stop the assault.

Voice of the Martyrs Canada reports Pastor Quang had a broken finger and several wounds on his face. His son also had several injuries.

The pastor has been severely beaten and thrown in jail many times over the years. His Bible College has been ransacked multiple times–one time by hundreds of assailants.

Earlier this year, Pastor Quang and a colleague were brutally assaulted.

Voice of the Martyrs Canada says Pastor Quang, a trained lawyer, is targeted often because he has spoken up against the violations the government has made against freedom of religion in Vietnam.

In an interview, Pastor Quang said, “They follow me the past 20 years, but in this period it’s more intense. The government was afraid of me creating riots to take back the land.”

These brave pastors continue speaking up for Christianity and freedom of religion in Vietnam, despite persecution. Pray for their strength and for divine protection. Pray also that the police will intervene if there are any more attacks.