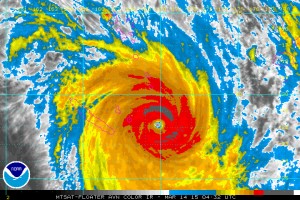 Vanuatu (MNN/CBI) — Houses are decimated, bridges are crumbling, and buildings are in shambles. Right now, this is what people in Vanuatu are living in.

Vanuatu is an archipelago of 83 islands east of northern Australia. Although it has become a popular tourist destination in recent years, it remains one of the poorest countries in the South Pacific.

Vanuatu’s government estimates around 70% of people living there have been displaced.

According to BBC President Baldwin Lonsdale, 90% of buildings in the capital were damaged or destroyed. The United Nations cited the FAO saying agriculture got the worst part, causing around $70 billion in damage.

Crossroad Bible Institute’s satellite campuses in the South Pacific are praying for the devastated country. CBI Australia director Ray Hoekzema said, “Australia has rushed aid and manpower to Vanuatu. It will take some time to restore the situation.”

For years, CBI Australia has worked hard at building relationships and enrolling students in Vanuatu’s prisons with hopes of expanding the Crossroad program throughout the islands. While access restrictions to Vanuatu’s prisons have posed challenges in recent years, Hoekzema remains hopeful that more doors will open when the time is right. “I have no doubt that in the Lord’s time, we will be there,” he said.

The “monster” storm also hit New Zealand as a tropical storm. However, as CBI New Zealand director Peggy Landkroon reported, the damage was not devastating. “By the time the cyclone hit New Zealand on the east coast, which is where we are, there was just a lot of rain,” she said. Landkroon added that CBI New Zealand will continue to lift up the people of Vanuatu in prayer.

Crossroad’s international coordinator Jacob Busscher echoed Landkroon’s sentiments. “We are thankful that students in the South Pacific were not affected directly by Cyclone Pam, but we know this disaster will have drastic effects on Vanuatu’s society. We are praying that proper aid will be sent to the people who need it and that God will open more doors for Crossroad to minister to Vanuatu’s prison population in the future.”

CBI is a non-profit ministry. With your donation, they can help build a better future and create second chances for people in prison all across the world.

Pray for those in Vanuatu to stand strong in their faith in the midst of adversity. Also pray for financial support.