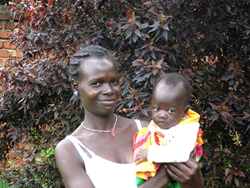 (Photo courtesy Food for the Hungry)

Uganda (FH) — [Editor’s Note: This is a press release from Food for the Hungry telling of their fight against HIV/AIDS.]

On December 1, individuals around the world will unite for World AIDS Day. Established by the World Health Organization in 1988, World AIDS Day is dedicated to the fight against HIV, showing support for people living with HIV and commemorating people who have died from the disease.

Food for the Hungry (FH) has been working to prevent the spread of HIV to babies through a comprehensive program being implemented in Uganda. According to UNAIDS, there were 1.6 million people living with AIDS in Uganda in 2013. Of those, nearly 800,000 were women and nearly 200,000 were children under the age of 14. A staggering 1 million children under the age of 17 have been orphaned in Uganda due to AIDS.

In an effort to prevent the transmission of HIV from mother to child, FH developed an outreach program to share prevention messaging and provide free comprehensive HIV/AIDS medical services to Ugandan women throughout pregnancy, delivery, and breastfeeding. The project has reached over 2,000 women of child-bearing age with HIV/AIDS prevention messaging and has enrolled 102 HIV-positive pregnant women in the project.

The results of the FH program in Uganda have been encouraging, with 90% of all infants born to HIV-positive mothers in the program remaining HIV-free throughout gestation, birth, and breastfeeding.

Twenty-six-year-old mother Peace Aber enrolled in the program while pregnant with her now 3-month-old baby. Before joining, she suffered greatly and says she was in a state of desperation and frustration. The counseling and encouragement she received through the FH AIDS prevention program gave her the encouragement she needed to completely change her outlook on life. “I have now come to realize that God loves me and has good plans for my life. I have a bright future ahead of me. I am now more confident and able to face any challenge ahead of me,” she said.

Peace, who currently owns a small business selling food in the market, says there is now an atmosphere of love and trust in her family. Her son was born HIV-negative, and she hopes he will grow up to become a doctor who will support others like her in the community.

Food for the Hungry partners with local churches who work to transform vulnerable communities in the name of Christ. Click here to see you can help.