Ukraine (MNN) — Rumors are swirling that Russia is planning a major military offensive into Eastern Ukraine. That’s according to former NATO Supreme Commander Wesley Clark, who led a team of military experts in an analysis of Russia’s military activity in the Ukraine conflict.

While this has yet to happen, Ukrainians are suffering NOW.

Amie Cotton with Christian Aid Mission says, “We assist eight different ministries in Ukraine. They are reporting back to us that there’s still a lot of suffering and killing still,” despite the ceasefire agreement.

Cotton says this is a nationwide crisis. “There’s a crisis where the war zone is. There’s fighting. You never know where a bomb is going to land. But then you’ve got a crisis in the West where they are trying to house their people that are fleeing and asking for help.”

According to the United Nations, there are nearly 1.2 million people who are internally displaced by the conflict. But homeless isn’t the only problem. Food are water are scarce in the war zone. 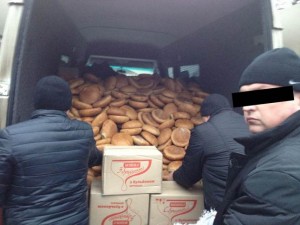 How bad is it? Cotton says, “One of our ministry leaders was sharing [that] he had not been able to reach his aunt, who lived in Eastern Ukraine. There’s a whole war going on, and you can’t just go and visit your family anymore. She was an elderly woman who was home-bound. Sadly, when they found her, she had starved to death.”

These eight ministries, Cotton says, are focused on the entire country. First, she says, they’re trying to meet the needs of those displaced. “They’re trying to find housing for them, food for them, [helping] families find jobs. It’s a very serious situation, and we’re not seeing this in the news.”

These ministries are also taking risks. “They’re actually driving and risking their lives to go into the war zone to take food to those who are still in Eastern Ukraine. They’re even going to the frontlines to pray for the soldiers.”

Christians are involved in these relief efforts, and God is working. Cotton says, “A lot of people, because of the uncertainty, are seeking the Lord. They’re coming to church for the first time. They’re coming to pastors and Christians and asking how to become saved. There is a revival going on in the midst of this war.”

It’s not a one-time event, either, says Cotton. “We’re getting reports from ministries that churches are open and people are praying all night. It’s really touching to see how during such trial, God is bringing people into the fold and meeting their needs.”

Christians are asking for prayer for peace, for money to help meet the needs, and people to do the work.

Because of the desperate situation in eastern Ukraine, bread and water are being requested. $1.75 provides bread for a family of four for one day. If you’d like to support Christian Aid Mission’s work in Ukraine, click here.