Ukraine (MNN) — It took about 17 hours, but a ceasefire agreement has been reached in Ukraine. The German/French-brokered deal is just the beginning of what all parties say is a long diplomatic road ahead. President Vladimir Putin was the first to announce the deal, but he also said there are still many issues facing the region. 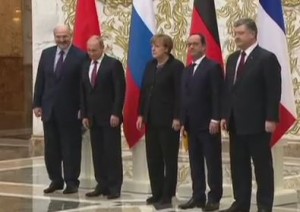 While the ceasefire has been agreed to, President of Mission Eurasia (formerly Russian Ministries) Sergey Rakhuba says, “The ceasefire will actually go into effect on the 15th of February. Even as we’re speaking, there are still battles taking place. People are still dying because of the shelling.”

Andre Murzin, assistant director of the Masters in Biblical Counseling program at Kiev Theological Seminary, says, “We put our trust in God, knowing that God controls everything. God controls all the kings, presidents–their hearts, intentions and their plans.”

Murzin says there is a mixture of hope and hopelessness in Ukraine, and Christians are asking an important question. “What should our role be in this war situation: chaplains only, or serve in the army? Some of my Christian friends have received draft notices.”

The uncertainty and increasing violence is making it difficult for the average person in eastern Ukraine. Rakhuba says their extensive church network is providing hope. “When bullets are flying around and the shells are falling on roofs of homes, in the midst of all of this they all of a sudden see young people bringing a load of food to people who are trapped there.” 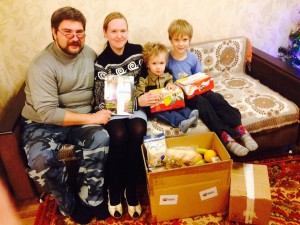 “God gave us a second chance, and now
our children are smiling again,” was Sasha and Lena’s
response when School Without Walls students from Kiev
visited the family with groceries, Gifts of Hope, and
Scriptures. The family evacuated from Alchevsk,
in Eastern #Ukraine, due to the fighting. They had to
leave their life behind there and are now struggling
to earn enough to put food on the table.
(Mission Eurasia Photo)

Rakhuba says it’s not just about physical assistance. Young people also “bring them Scripture, they bring them food, they bring them encouragement. In the midst of this crisis, we believe the church can bind up the wounds of society, helping physically and spiritually.”

Rakhuba is asking you to pray that the ceasefire will hold and that churches can again provide aid for war victims. Those churches that are involved in reaching out to refugees are growing as people “see how the church is actually the place of refuge. So, we definitely see the church using an opportunity in Ukraine to bring the Gospel to their society.”