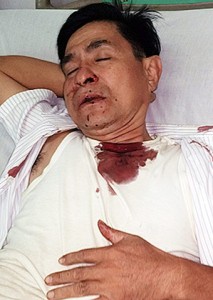 Vietnam (MNN) — All men are created equal, but decades and eras of people have failed to acknowledge this. They’ve let hate crawl into their minds and somehow let it control them completely. Much of the time, the hate has led to violence.

On Sunday January 18, 2015, five men attacked two pastors in broad daylight, not more than 500 meters away from their Bible College. They were beaten with rocks and bricks, then kicked mercilessly.

Release International reports Pastor Nguyen Hong Quang suffered from worse injuries than his colleague. He received a broken nose, broken ribs, and several facial injuries including damage to his teeth and jaw.

Though this wasn’t the first attack, it was the most brutal.

Throughout the month of November, several attacks on the Hoh Chi Minh Bible School took place. The Voice of the Martyrs reported 300 assailants threw stones in early November. Three more attacks occurred, including vandalizing the school and arresting nine Christians who didn’t have proper documentation. According to Release International, officials had confiscated their papers previously.

June 2014 seemed to be endless. Attacks continued taking over the school. The Voice of the Martyrs reported 67 students would be graduating on June 12, but on June 9, 300-500 people, including police and hired men, surrounded and ransacked the school. Students and Pastor Quang were beaten, and many people–one as young as ten–were arrested. Sprinkled throughout the rest of the month, other church members were attacked with rocks.

In 2010, the school received international attention when it was bulldozed to the ground and Pastor Quang was beaten unconscious.

Voice of the Martyrs Canada reports the government restricts religious freedom through legislation and registration requirements by harassing and intimidating unsanctioned religious groups.

Time after time, the Bible school was ransacked and destroyed. Pastor Quang was arrested and beaten multiple times, but not once did they go without prayer or support.

After the most recent attack, Voice of the Martyrs Australia paid for all of Pastor Quang’s medical bills. There is a multitude of ministries praying over him, his colleague and his school. Will you join them in prayer?