The first reported fire took place in a small village. It remains a mystery how the fire started, and police are still investigating. A few families woke up to the smell of smoke and went outside to investigate. 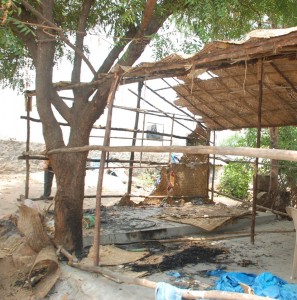 Villagers were able to save some
of this partially-burned church.
(Mission India photo)

They found the church going up in flames. Alarmed, they doused the fire with water. Thankfully only part of the church was burned in the fire. They were able to replace the damaged roof with a temporary blue tarp to keep out rain and dew.

A pastor named Yamar and his wife have been sharing about Jesus in the community for 10 years. He says, “It’s very heartbreaking, but we trust in the Lord that there’s something better ahead for us.”

1,500 miles away from that site in east India, a second church was also burned.

The following morning after the fire, nothing remained of the building but bits of wood, ashes, carpet rags, and the rubble of what used to be musical instruments.

The pastor of this church oversees a class of Mission India Church Planters who are doing outreach among the families living on the nearby hills.

As violence against Christians is on the rise in India, pray for their safety.