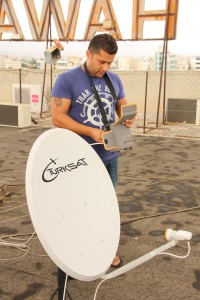 The Türksat 4A is Turkey’s most popular satellite, reaching over 50 million viewers. Starting this year, shows produced by SAT-7 — a Christian satellite television ministry to the Middle East and North Africa — will be aired on the first and only Türksat 4A Christian channel.

Until now, SAT-7 TÜRK has only shared satellite time on other SAT-7 channels. More recently, it began broadcasting 24/7 on the Internet, reaching a quite limited audience.

“We are overwhelmed and truly believe it is a miracle that we can finally broadcast on Türksat,” says Melih Ekener, Executive Director of SAT-7 TÜRK.

“We have hoped, dreamed, and prayerfully anticipated this launch since the station began airing on SAT-7 ARABIC in 2006. It is really a miracl, and we are very thankful to God for what He has been doing.”

Christianity has deep roots in Turkey’s history. Unfortunately, this is often overlooked, and many people have been fed misinformation and carry misperceptions about Christ, Christianity, and its important influence in early Turkish history.

“For those who do not know the context and history of Turkey, this might not come across as a historic moment, but it really is,” notes Ekener.

“This shows how much Turkey has changed and, even in the midst of often disturbing news we read about Turkey, there are some great things going on.”

“This would not have been possible without the Turkish authorities taking the time and interest to engage with Christians and accept our applications, granting us a frequency on the official state satellite,” he explains.

“We praise God for this moment. We rejoice in the decision of the Turkish authorities and join all Turkish Christians in giving thanks for this historic development.”

The hand of God 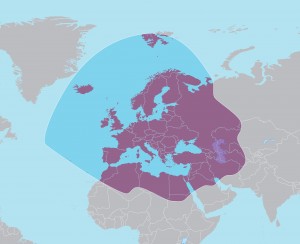 The Türksat 4A broadcasts to Turkish-speaking audiences in Turkey, Europe, and Central Asia.
(Coverage map courtesy of SAT-7)

”So many things have miraculously fallen into place over the past few months, that it is impossible to miss the hand of God in facilitating the start of SAT-7 TÜRK broadcasting on Türksat,” he says.

“We give God the praise for this exciting development, and also recognize the signal this sends to the world about the Turkish authorities positive attitude towards Christians and other minorities in the country.”

SAT-7 TÜRK staff produced 360 hours of new programming in 2014, but this is expected to increase dramatically in 2015.