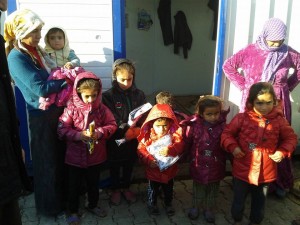 Turkey (MNN) — Syrian refugees are in the fight for their lives in Turkey. The Islamic State has forced thousands from their homes. Now they’re trying to survive in camps in snow and subfreezing temperatures.

The needs are great, Konutgan says. And while “the evangelical church [in Turkey] is very small, [they] have done marvelous things for the refugees. They are welcomed by the local authorities. They respect the churches, and they welcome us very well.”

Konutgan says these refugees were stuck in the mountains without food or water. “When I say that this support comes from the churches, they say, “Ah ha! Because of the churches, we are safe.”

The stories from the mountains are horrible. One woman told Konutgan that some of women didn’t want to see their children suffer, so they threw them off the mountains to their death.

Another woman told him that she had given her daughters to a Saudi man and gave him $50. He said he would take care of them until after the conflict was over. She hasn’t heard from the man and believes her daughters were kidnapped.

Christians are meeting the refugees in their despair, providing hope found in Christ alone. You can help, too.

Konutgan says the refugees want to know about Jesus. And in the midst of tragedy, God is working. “They hear the Bible, so this is a good opportunity for the Gospel. I’m sure they will come to Christ Jesus. There are thousands of people among them who secretly say they love Jesus.”

The opportunities are limited only by money. Click here to help provide for the physical and spiritual needs of refugees.