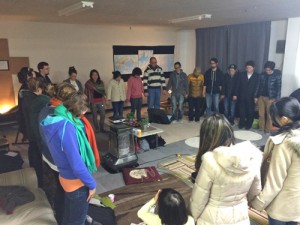 The country had a moment of silence yesterday, March 11 at 2:46 p.m. (0546 UTC), the exact moment a 9.0-magnitude undersea quake hit the northeast coast of Japan. Remembrance ceremonies were held near the devastated cities and villages on the country’s northeast coast. Many joined hands in prayer or bowed their heads during the national minute of silence.

President of Asian Access Joe Handley was in Japan when the quake hit. “Four years ago today, [my wife] Silk and I were in Karuizawa, Japan, with most of our Japan staff and Asian Access/Japan National Leadership. It is a day that I will never forget.”

He remembers, “Being well acquainted with earthquakes growing up in Southern California, I wasn’t concerned at first. But as the earthquake kept going minute by minute and getting stronger by the moment, I began to worry.”

Handley says A2 was able to mobilize their team. “Half of our missionaries moved to the disaster area, and tons of aid was raised and sent to local pastors. The stories of Japanese churches and local pastors standing in the gap was–and continues to be–powerful. The hope they brought to the people was incredible. Many have found new life in Christ, yet others are still stuck in temporary shelters, displaced from their homes.”

A2 also remembered the devastating quake, tsunami, and nuclear power plant meltdown through prayer. Handley is also asking believers to pray. “The people of Japan are hungry for hope, and your prayers and support can go a long ways.” He adds, “Consider going to serve in Japan to bring hope and health to the people.”

During this tragic time in Japan’s history, many people came to know Jesus and are now attending church.