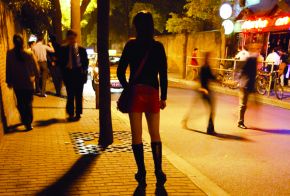 OM Singapore’s office is in the heart of the red light district. I have walked in the area many times in the daytime. You’ll encounter a number of women, but they are very discreet. Still, my view at one time was that they had low morals, were lazy, and chose an easy way out from earning “honest income.” I tried to avoid them.

One of the women in my international office has a burden for these women and the larger injustice of trafficking that molds their lives. She connected with a local church that has an evening ministry to these women and would come back to our office full of stories of encounters among them.

I realized that as the director of a large mission organization that was increasingly involved in justice issues, I had to get closer to the issue and to real humans involved. So, with my wife, Susan, and others, we attended a briefing at the church, prayed together, and then went in teams to see the reality and hear their stories. We carried New Testaments in various Asian languages, along with nicely-wrapped gifts of sweets and a letter entitled, “The Father’s Heart.”

What an eye-opener! The place was bustling with thousands of people from different ethnic groups. We’re not talking about one street but several blocks. At first, I was very uncomfortable: what do I say to either the men or the women? What should I do?

I felt no fear to be there, but I saw fear in every girl’s eyes. Some were very young. None would at first accept the gifts, first looking for their pimps’ approval. One Indonesian woman wouldn’t even look at us. I told her, gently, in Malay, “This is a free gift.” She looked at Susan and me and said, “Ooh…Christian?” and then smiled broadly and said ‘Thank you.’ Once they learned that we were Christians, they relaxed.

These girls were slaves, not talking directly to johns, but following their pimps’ directions. 95% of the women were trafficked here against their will. This experience turned my attitude and awareness 180º. They aren’t loose or lazy: they are trapped. Their pimps hold their passports and often increase their bondage by threatening to harm their families back home. They’re shipped to one place for a month and then moved to another Asian city.

One pimp in a documentary observes that “these women are better END_OF_DOCUMENT_TOKEN_TO_BE_REPLACED than heroin.” He meant that if you sell heroin, it is a one-time transaction, whereas you can sell a woman 10 times a night for years.

We know what Jesus would do

We ought to show understanding and grace to these victims, but if we ever hope to attack the systemic causes behind trafficking, it must first begin with spiritual battle in prayer. There is also a larger, glaring issue to face: in most cities, there are thousands of Christian women who could mobilize a wave of compassion for these victims and also spearhead a campaign to fight the status quo. They need to experience what I experienced and make what is called the Glory Walk.

I’ve told the women in my office that every visiting OM leader should do the same. Instead of anger or disgust, you will be filled with deep compassion. Yes, there is a place for the kind of motivational anger that will work hard for justice for the oppressed. But remember: even pimps are victims of a system–it’s not the way things are supposed to be. They are a product of their environment: if you grow up in poverty and oppression, you learn to see the sex trade as a business, especially if there is no other work. You have to survive.

We cannot ignore this dark side of the world’s cities. We have to keep showing up for these women. Even their pimps see that we are not a threat to them directly, calling us the “Hallelujah People.” Some of them have also come to Christ and assertedly denounced the evil they had come from.

The Church, and missions, needs to educate our people on our attitudes toward these victims. If we’re at all serious about making a dent, it’s not enough to rescue a women from this life; what do we expect her to do for a living afterward? They need skills, but before that, they need to rebuild their self-worth and confidence, which have been destroyed. Otherwise, they will always feel worthless and ashamed. They also need protection for their families at home.

Child labor and women at-risk aren’t the problem. The problem is that we know what Jesus would do.

Learn more about the work of OM in Singapore.