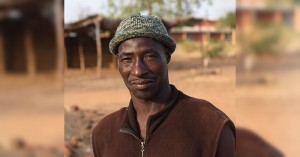 Congo-Kinshasa (RBD) — For two days, Mbutu walked to reach a remote radio station in the Democratic Republic of Congo. But the journey was worth every step. When he arrived at the station, he shared his amazing story of transformation with Reach Beyond.

Mbutu was a village witchdoctor who practiced black arts. His life was devoted to casting spells, trying to control natural elements, and offering useless cures to those who were sick.

But something happened to him that changed his life forever. Months earlier, staff from the radio station had provided SonSet radios to people in the village, including Mbutu. SonSet Radios are solar-powered, so there’s never a need for batteries. They are also fix-tuned to the local Christian radio station.

As he listened to the Gospel through his own radio, Mbutu learned of the One who really controls the universe. More importantly, he learned about the love of Jesus and His offer of forgiveness and redemption. Mbutu was so touched by the message, he became compelled to give up his life as a witchdoctor and become a follower of Jesus Christ.

Today, Mbutu travels from village to village teaching other witchdoctors the truth of God’s Word. And because of his encounter with Jesus through a small solar-powered radio, many former witchdoctors are now pastors in new village churches.

Reach Beyond refuses to stand idly by as people enter eternity without Christ; the ministry shares the Good News that transforms individuals. [From the Reach Beyond Manifesto]