SE Asia (MNN) — Life would be a lot easier if we could just plug our ears and pretend that sex slavery and human trafficking don’t exist. When major issues don’t impact us directly, they’re much easier to ignore. As the infamous saying goes, “Ignorance is bliss.”

A song by the Christian band Switchfoot, “The Shadow Proves the Sunshine,” challenges this mindset. How can the greatness of God’s redemption be made known without some measure of tragedy? How can sunshine be appreciated without first encountering shadows?

In India and Nepal, the shadow proves the sunshine as Vision Beyond Borders (VBB) introduces human trafficking victims to the hope of Christ. Sometimes, the darkness VBB encounters while doing this work comes straight from the pit of hell.

“One of the girls in the [Nepal] safe house is 18, and she and her two sisters were used [sexually] by their dad for four years. The mother said, ‘This is your dad’s way of showing you that he loves you,'” recounts VBB’s Patrick Klein.

The girls ran away and ended up on the streets; VBB and their ministry partners in Nepal are working to find the younger sister to bring her into the new safe house. The girls’ father is wealthy and has threatened to sell the older daughter into a brothel in Delhi.

Please pray for a full-time security guard to protect the 13 women and young ladies currently living in the safe house. 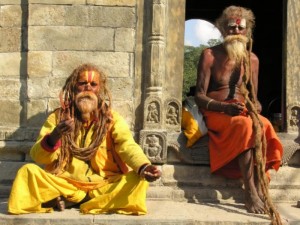 So-called “holy men” wait outside the entrance of the Hindu temple. Covered with human ashes, they smoke marijuana and have cow dung in their hair.
(Image courtesy VBB)

Klein recently brought a small team to visit the ministries in Southeast Asia. “I wanted the guys who were traveling with me to see the problem firsthand,” he explains.

As the team witnessed a Hindu celebration of “Women’s Day” during their first day in Nepal, they began to understand the pervasive cultural darkness of Southeast Asia. Listen as Klein describes what they saw in this interview.

“It’s just such an evil, dark place, but then we left there and went to the safe house,” says Klein.

“Our friends commented, ‘Wow, this is beautiful. It’s so clean, it’s so bright, and there’s so much light here compared to the temple and the darkness in there.'”

The concept of shadow proving sunshine played out in real life as the VBB team entered the new safe house. All 13 girls and women were gathered around a table studying God’s Word. Then, they all shared a time of praise and worship when the Bible study was finished. 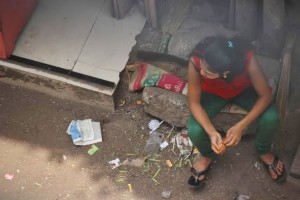 A girl waits outside a brothel entrance. Conditions are filthy and sickness is rampant. Girls who succumb to infection are turned out on the streets to die.
(Photo, caption courtesy VBB)

You can help the Light of Christ reach another girl hidden in the shadows. Click here to support the work of Vision Beyond Borders in Southeast Asia.

“We need to take a stand,” says Klein. “We need to stand up for those that are oppressed, for those that cannot speak up on their own behalf…. These girls and these women, even little boys, are trafficked. They are forced into sex slavery; this is not something they choose.”