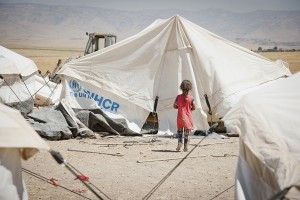 Iraq (GAiN) — Editor’s Note: Global Aid Network sent us this missive in an urgent prayer alert.  There’s no easy way to describe what is happening around the world. What follows is their message in its entirety:

History is constantly circling and repeating itself.

In northern Iraq, an old threat is emerging with unprecedented violence and destruction. Calling itself the “Islamic State” (formerly known as ISIS), the growing movement of extremist Muslims is seeking to bring all Middle East cultures under its control. The first designation, ISIS, stood for “the Islamic State of Iraq and al-Sham,” but their vision quickly expanded beyond those geographical boundaries.

According to all sects of Islam, the Caliph is the rightful successor to Muhammad as Allah’s appointed leader of the faithful.

The last caliphate ended in 1924 with the fall of the Ottoman Empire and the establishment of the Turkish Republic. In declaring itself a caliphate, the Islamic State is claiming authority for itself over the Islamic world.

They named Abu-Bakr al-Baghdadi, or Abu Dua, as the new Caliph. In keeping with the strictest Muslim tradition, he is born of the correct bloodline in the Quraysh tribe of the Arabian Peninsula. He is a gifted motivational speaker, and he is calling on multitudes to become murderers for the advancement of this Islamic State.

As these actions are upsetting, extreme, and harsh, Jesus warned that the world would be shaken by the evil deeds of evil people. But He also promised that faithful servants of God would ensure that “the gospel of the Kingdom would be proclaimed.”

Pray that followers of God would not be discouraged or shaken.