MENA (WAS/MNN) — What do Al-Qaeda, the Taliban, Islamic State, Al-Shabaab, and Boko Haram have in common?

Right now, it’s terrorism in the Middle East and Africa. You’ve seen the headlines about advances, bombings, death, refugees and fear…but there’s actually good news emerging, too. Bruce Smith, President and CEO of Wycliffe Associates says, “God is moving in a way, in this arena of the world that, to my knowledge, in my lifetime, is unprecedented.”

Yesterday, MNN reported on people turning to Christ despite ISIS in their region. These groups have committed atrocities in the name of Mohamed, and disillusionment has kept pace with the brutality. “What happens there is light stands out as a stark contrast in the darkness, and people are turning toward the light. In our arena, in terms of Bible translation, people are stepping up and saying, ‘We want to make sure that the light of God’s Word gets to the rest of our people and the rest of our communities.'”

Those turning to the light include members of the terror groups whose objectives were to expose and eliminate Christians. Sound like Saul of Tarsus? It’s very much like that, says Smith. “Many of them have had an equally dramatic conversion that we see described in Acts where we see Paul came to Christ.”

He notes that some of these people are now members of national Bible translation teams, and targeted, themselves.   “In many cases, they’re undergoing the same kinds of persecution that Paul experienced. And yet, they’re willing to make that sacrifice because they believe in the power of God’s Word. They see the power of the Holy Spirit in their lives, and they want that for their family, for their friends, and for their neighbors.” In fact, Smith adds, “They are as radically committed to pursuing God and to living for Christ in their communities as Paul was.”

Wycliffe Associates is trying to provide indigenous Christians in the areas affected by these groups with resources for Bible translation. For instance, Scriptures for New Frontiers is providing national Bible translation teams with training and technology in geographical areas where Christians and Westerners are viewed as enemies. In the Scriptures for New Frontiers area, there are nearly 1,000 languages without the Scriptures, representing 280 million people.

Here’s the really cool part: “There’s a network of thousands of house churches in this arena of the world, where the leadership of the church has made the decision that they need God’s Word in their language sooner instead of later.” This underground network lays the groundwork for future translation projects. “They have identified people within their church communities, people that have spiritual maturity and insight, people that have commitment, that have language skills and abilities that are multilingual, so that they can work with other language sources for Scripture as well. These house church movements have made the decision to move forward with Bible translation.” 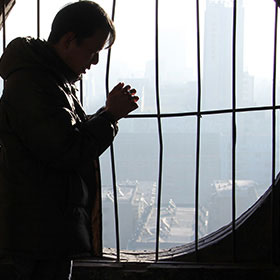 In addition, the organization has recently launched Open Bible Stories, 21 Old Testament and 29 New Testament Bible stories that can be typically translated in six weeks or less. Wycliffe Associates is seeking to raise more than $204,000 to provide the necessary resources to support Scriptures for New Frontiers translation efforts in the next year. Sense the urgency? Smith says its dangerous work. “They are risking their lives. They have other believers from their communities who have lost their lives in recent months for their faith because of their involvement in Bible translation.”

In effect, they’re turning the tide of terrorism, one heart at a time. Does that sound possible to you? Prayer is the catalyst. “We need to cover them with a cloak of prayer and plead for God’s intervention, in their circumstances, to protect them in order to be able to winsomely do this work in that arena.”

Then, consider helping fund this project toward its goal of $204,000. Nobody likes asking for money, but the reality, says Smith, is “these things don’t happen for free; we need to be able to develop the resources that will help them be effective in their work. There are lots of challenges surrounding that, so this is a strategy that we’re intent on for the coming months.”