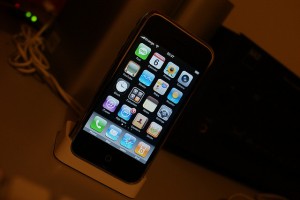 International (MNN) — There’s always a lot of hype when the next generation of the iPhone comes out.

Sometimes the excitement builds to a Black-Friday-like insanity: people waiting in line for weeks so they can be one of the first to get the new phone.

In the craze to get the new and improved version of the iPhone, there is something consumers are likely to overlook: their old phone.

Some will sell their old phone for a fraction of what they paid for it, and others will put it in their junk drawer and forget about it. Some even will toss the phone to avoid the hassle of reselling or recycling.

If you fall into one of those categories, Compassion International asks you to consider giving it to them. Through their partnership with iDonate, Compassion receives money from your old “stuff.”

According to a survey done in 2012 by Lookout, a mobile security company, 62% of those surveyed have at least one phone they’re not using. 11% say they have four mobile phones not in use.

When asked why they kept their old phone, almost one third of survey participants replied that they didn’t know what to do with their old phones. Almost 52% of those surveyed said they would be willing to donate the phone to a charity.

Do you have old phones sitting around your house? Would you be willing to give them away for a good cause? If your answer is “yes” to both questions, keep reading. If you don’t want to give away your old phone, keep reading. There are other options as well.

Compassion partners with iDonate who takes in your old phones, sells them, and sends the money to Compassion. This money is an important part of keeping Compassion in operation.

And this is the most important part: the money from your old phone not only helps children escape poverty all around the world, but it also helps teach children about the true compassion of Jesus. Many of these children come from difficult backgrounds that don’t present a lot of hope.

The hope of the Gospel is the most important gift these children can ever receive. If something as simple as an old cell phone could do that, who wouldn’t want to help?

Your old vehicle, jewelry, electronics, etc. can also be given to iDonate. Does anything come to mind? Click here to get connected.

If you are intrigued by the work of Compassion but don’t have anything to donate, consider child sponsorship. Click here for more information.