China (MNN) — Editor’s Note: As we enter this holiday season, Thanksgiving and Christmas, we want to share some impact stories of how you, as listeners and readers, have impact on Kingdom building around the world. In this case, it’s Bibles For China.

The ministry offers thanks on behalf of the thousands of rural Chinese Christians that have received a Bible because of your prayers and donations. Please pray for the upcoming January team as preparations are made for them to verify the distribution of more Bibles.

What follows is their story of joy in places both expected and unexpected: 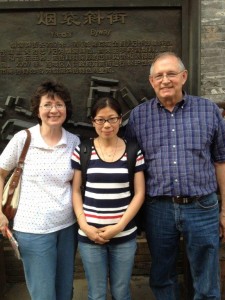 “God is at work in China! Since our very first trip, Bibles for China has been seeking ways for us to minister directly with the partners the Lord has given us in China. In May of this year, two teams were assembled to travel to China in order to witness the distribution of thousands of Bibles in rural China. It was evident that God’s blessing and leadership was with the three couples and three other individuals as they shared the joy of meeting and loving the Chinese people.
Through a series of circumstances, they were privileged to meet a lovely young lady we will call ‘Annie,’ who served as their translator during part of the trip. She was extremely knowledgeable and helpful to the group, and spent hours helping one of the young ladies who needed assistance in making arrangements for extending her Visa for her summer internship in China. The group left China with a warm heart toward Annie but had no indication that she had any knowledge of the Christian faith. 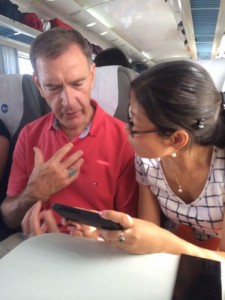 In July, the Chairman of the Board and the President of Bibles for China spent time in China with a Partner and hired Annie as their translator. Again, they found her to be a delightful Chinese lady who had been well-trained to assist foreigners to get around in China. Their means of transportation was a ‘slow’ train (70 mph) as opposed to an express train (200 mph). What a blessing this was as they had ample time to get acquainted with Annie and with the Partner who had arranged for the distribution of Bibles in the area that had been selected for them to serve.The plan of Salvation was shared with Annie, but her response seemed rather neutral. This was not surprising, considering that a large portion of the population of China does not even believe there is a God, let alone understand the sacrifice that His Son made for our sins. 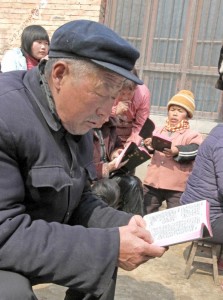 As a part of the first Bible distribution of the trip, the President was asked to share. He expressed appreciation to all who helped carry out the passion of serving these rural Chinese Christians with Bibles and how the team’s hearts and lives had been touched and enriched by getting to be with them for this celebration. As he shared, he was overcome with the emotion of gratitude for all those who had provided Bibles for these precious Christians. Annie showed similar emotion as she translated his words. After the team loaded back into the van, Annie was asked what her thoughts were, and she replied, ‘I was shocked! I never knew there were churches like this in China.’ The team complimented her on her fantastic job of translating even to the point of expressing emotion in the proper places. Her response was, “‘hat was not a translating issue. I was overcome, and I felt the touch of God during that time.’

That day, Annie began a journey of faith that is continuing to grow and develop. She went to her room that night and started reading her Bible. If you were given a book to read that you were unfamiliar with, where would you begin? At the beginning, of course!

Although the stories of creation and the Garden of Eden in book of Genesis were interesting, it did not energize her spiritually, so the next morning she was advised to begin with the New Testament. The next few days with her included the beginning of a discipling process. Stay tuned for updates on the way God is working in her life. Her contribution to the Lord and the Kingdom will only be known in eternity.”