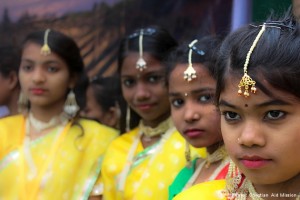 India (CAM) — [Editor’s note: This story was taken from a Christian Aid Mission Web story, sharing how a pastor is turning away wrath from Hindus and Muslims.]

Amid a roiling controversy about religious conversion in India, an interviewer from a Delhi television station asked the pastor and leader of an evangelistic ministry in Uttar Pradesh, Sanjay Sankar*, whether conversions should be allowed. High-level Hindu nationalists were proposing that conversions be prohibited.

Working in an area where harassment from radical Hindus preempts public evangelistic events and nearly half of the residents are Muslims whose prohibition of leaving Islam sometimes leads to violence, the pastor appeared to be driven into a corner wherein anything he said would pour fuel onto the fires of controversy.

The interviewer pressed him, asking him if he converted people.

“I cannot convert people. I teach them from the Bible what we believe, and the law in our country is that everyone is free to preach his or her religion, and everyone is free to change his religion,” he said. “But if you want to talk about that, I share what I believe, and it’s Jesus who converts them. It is Jesus who changes their heart, and if they start coming to my church, it is not my problem. It is His problem. Go and ask Him!”

When the interviewer asked him what he meant by conversion of the heart, he responded that while Hinduism’s concept of dharma implies first and foremost right behaviors and duties, Christianity is first and foremost a faith, from which good works follow.

“Christianity is not a duty to go to church, convert people, or do this or that,” the pastor told him. “But Christianity is first belief, and anyone can do it, even you can believe in Jesus Christ.”

The pastor thus sidestepped controversy and remained true to his convictions. After the interview was broadcast that night, Hindu and Muslim friends told him of their admiration of his responses. Thus he strengthened bridges for further gospel proclamation.

The pastor’s emphasis on sharing blessings, rather than erecting barriers, has led to a ministry that has trained 127 indigenous missionaries and pastors, planted 200 churches (10 among largely unreached Bhojpuri-speaking people), established a children’s home and school for 800 kids, vocational training for women, and conducted outreaches involving youth camps, literacy classes, family counseling, film and literature distribution, and hand-pumps for clean drinking water.

“One day an officer called from the registration department, where they register the societies,” he said. “He asked how many children do you have, how many are Hindus, how many are Christians, how many have you converted? And I really laughed. I said I have not converted anyone, it is God in Jesus who converts people.”

People in India, he said, don’t want to hear about Christ. They already know about Him, with many counting Him among their hundreds of gods. Rather, they want to see Him, he said. The outreaches are crucial for showing people the love of Christ in an area where large evangelistic rallies are no longer possible. In the past two years, especially, he said, Hindu radicals would throw stones or otherwise disrupt such events.

Muslim hostility also has to be managed. The ministry boarding school includes a 14-year-old boy from a Muslim family who, along with his parents, had put his trust in Christ while living in their village 120 kilometers (74 miles) away. When the boy went home for the holidays, relatives noticed him reading the Bible and not attending the mosque, and before long, the local imam issued a fatwa calling for him and his parents to be killed unless he returned to Islam and the village.

Sankar said it’s a matter of fervent prayer, because he must decide what to do if relatives come for the boy. The pastor called him into his office and asked him what he thought.

“He said, ‘I’m ready to die, but I will not go back. Now I know I don’t want to go back to my home, even for holidays. But I’m not going to leave Jesus Christ,’” he said. “His faith is so strong. So I told him maybe one day because of you, the whole village will come to the Lord. And he said, ‘Yes, I believe that as soon as I finish my studies, I will be strong enough and bold enough that I will go there and preach the gospel in my own village.’”

Sankar said he’s considering sending him to another Christian boarding school, though he’s not sure if it is possible.

“He is safe with us, but it can be unsafe, as well, because suppose the mob comes from the village,” he said. “This imam will come with 20 people and say you have to come out, and then what will we do? So let’s pray for this boy. I said I will definitely not leave him like that.”

At the same time, Hindu extremists have threatened some of the area pastors, he said. “One pastor said they were celebrating Christmas at their church in the village. Suddenly a group of young people came and started throwing stones and shouting and creating problems, and they had to close the whole program,” he said. “These kinds of things are going on in the villages.”

Among Sankar’s top priorities now is starting a dairy farm. The 63-year-old pastor said that by the time he is 65, he would like to see the school be self-supporting so that, in the event of funding shortfalls, at least the children would be fed and all 23 teachers would be paid. At present, the school has only 11 paid staff members. A farm with 25 cows providing milk, as well as dung used for cooking fuel and fertilizer, and urine used in medicines and incense, would make that dream a reality.

“But why a dairy farm?” he said. “The main reason is that these Hindu people can go against a school, church, or another ministry, but they cannot go against a dairy farm. Because we are taking care of ‘holy’ cows, it will be a sin on their part. So the dairy farm will always act as a guard for our ministry.”