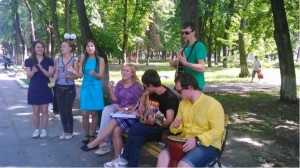 Russia (MNN) — Russia has been the “bad guy” in many news reports lately, especially reports about Ukraine. However, Russian Ministries is sharing a reason to celebrate: street evangelism in Oryol, Russia is bringing Jesus into everyday conversations.

Young Christians in Oryol, a small city near the Ukraine-Russia border, have been telling people about Jesus on a regular basis since May. Russian Ministries says street evangelism is part of Grace Church’s “Year for Jesus” project.

A Year for Jesus began when a team of young believers from Grace Church went to a local park and started singing Christian songs. The team had just received training in street evangelism, and they quickly split into two groups. One group sang Christian songs while playing instruments, and the other group spoke to interested passersby.

“People want to hear God’s Word,” said Aline, one of the Year for Jesus team members. “They are definitely spiritually thirsty.” 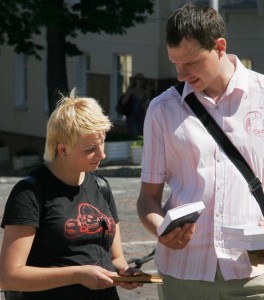 The group who engaged people in conversation also handed out Christian literature and invited them to church services. Russian Ministries provided copies of Hope Magazine and the Gospel of John for teams to use in street evangelism.

“Most gladly accepted the literature and the invitations. It was a joy to me to realize that I was part of God’s enormous plan to bring salvation to Russia,” Aline added.

So far, at least six people have come to know Christ as Savior through this ministry.

Since their initial outreach in the park, around 20 believers have been sharing Jesus in one way or another: street evangelism, door-to-door evangelism in nearby villages, daily prayer, and Bible study.

Please surround the team in prayer as they boldly proclaim the Gospel. Pray for courage to endure and for hearts to be softened to receive God’s Word.