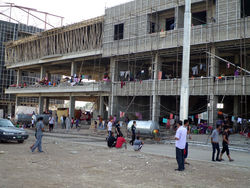 Iraq (OMI) — Editor’s Note: MNN is sharing an on-the-ground perspective from an Operation Mobilization specialist working in Northern Iraq. Rather than re-write the story, we’ll share it as it was written in blog form from the ministry’s Web site.

*Dakota Daemyn, a disaster response specialist serving with OM Near East, led a week-long assessment of the current crisis in northern Iraq. That assessment forms the basis for OM’s ongoing ministry to displaced Iraqis in the Kurdish region of Iraq.

“I no longer have any words to tell the people,” the local pastor says, with an overwhelming sense of sadness. “After all that has happened and all I have heard, I have no words left to give them.”

*Pastor Rashad, a strong-looking, tall man in early middle age, takes time for us in his office in northern Iraq. A security monitor in the corner shows the road outside the church, a silent reminder of the ever-present threat of increased insecurity.

Inside the office, a quiet air conditioner makes the room much more comfortable than the corridor outside, where several people mill around. Guests of the church fill the rooms and floors night after night. They are guests because they no longer have a place to call home, having been chased from their cities and their villages by the Islamic fundamentalists of Islamic State, or ISIS.

“We try to prioritise the most needy,” Pastor Rashad explains. “But how do we turn people away? How can we do that?”

We sit together, and I ask him about the challenges he is facing, wanting to know more so that that people can be informed and stand with him in prayer.

A few days earlier we had sat together and talked about the church’s planned activities to support these internally displaced people (IDPs) from elsewhere in Iraq. Pastor Rashad had outlined the plan to hire a wedding hall to house and feed another 50 families. He had listed the differing departments the church had designated–some overseeing the provision of food, some the distribution of clothes, still others the essential items for sleeping night after night in a hall full of people.

This local church in northern Iraq is a compelling example of a church putting love into action.

During this meeting, Pastor Rashad spares more of his precious, much-demanded minutes to give an update on the progress of plans to start a school for IDP children–plans that just got approval in an astonishingly quick two days.

The pastor recounts a more troubling development. “A key leader is leaving,” he says resignedly. Not a major problem, in normal circumstances. But these are not normal circumstances. Right now the church needs all the leadership it can get, as it struggles to minister to a multitude, who are traumatised, despairing, and facing an utterly uncertain future. But it is impossible to blame the leader for wanting to leave. Utterly horrific stories are emerging of cases where fleeing people have had a child grabbed from them by ISIS.

This is how bad the situation is. Many Iraqis are trying to leave, hoping to reach a bordering country, and then, if they can, countries beyond. And church leaders are amongst them.

“I’ve had to think: if [ISIS] can do that to people there, they can do it here,” another church leader explained to my colleague. “I’m starting to wonder if I should send my wife and daughter somewhere safer.”

“What’s your biggest challenge? How can the [global] Church pray for you?” I’d asked these same questions the day before to another pastor, in a city close to the border. The same answer came: “So many of our people are leaving. They’ve lost confidence in the country; they don’t feel they can live here.”

Late the previous evening, I’d stood on the curb in a hot, dimly lit town street as I waited with another pastor for our vehicle to have its leaking fuel line fixed. “It’s only by God’s grace that I keep going each day,” he said. “I’m so tired.”

We met with dozens of families who filled block after block of unfinished concrete building shells. The pastor was surrounded by people pressing in to tell him their needs. Caught up in a sea of bodies, his face was shining with a tangible sense of the presence of Jesus. Those I’ve worked with, who walk most closely to situations of despair, who minister to the needs of the most desperate, are sometimes marked by this joy. Not bleakness or a sense of world-weariness, but a sense of God’s presence that is unstained by the vileness of this life that washes over them in their daily encounters. The presence of Jesus was amongst those people that evening, as the pastor moved amongst them.

Yet he, too, spoke of key people leaving. In the book of Exodus, Moses holds his arms up, and the battle favours his people. Yet when his arms drop from weariness, the battle turns against them. Victory comes when those around him–his key lieutenants–hold up his exhausted arms. There’s no clearer picture of Christian leadership in situations where the task is so great. No leader can minister alone; they need their team around them. Right now across northern Iraq, at one of the church’s most crucial hours, leaders are being abandoned. Alone, they can only stand for so long.

Please pray for these leaders. Pray that despite the despair they face every day, and the huge needs they are struggling to meet, they would be able to keep going. Pray that they would find, somewhere, words of hope to speak to people who have lost everything. Pray that their co-leaders, where they can, will stay. Pray that others will rise up, even those young in faith, who will stand with them. The early church leaders only had, at most, three years of discipleship before the task of building the church was turned over to them. This is an incredibly important time for the church in Iraq and in the Kurdish regions. And yet its leaders face being abandoned at the height of their struggle.

In response to the current crisis, OM has launched a relief project that is currently being implemented in four locations in North Iraq, helping thousands of people from Christian, Yazidi and minority Muslim backgrounds, with basic food aid, hygiene kits, mattresses, and blankets to help with immediate needs. Just $100 will provide a FOOD PACKET to feed a family of six for one month. $200 will feed two families. It will make a huge difference to Muslim refugees who are terrified and trying to survive.

The situation is very fluid, and the response is adapting in some places on an almost daily basis.