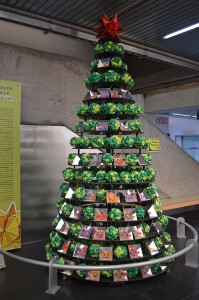 Mexico (MNN) — Want to change how you celebrate the holidays? Why not spend Christmas in Mexico?

Ashley Williamson with Buckner International says they need more people to join their upcoming Shoes for Orphan Souls trip to Mexico City. She describes the type of people they’re looking for: “Someone who has a big heart for kids and for missions, and just for sharing the hope and love of Christ.”

From December 6 to 11, Buckner’s team will be fitting orphans with new shoes and telling the kids about Jesus.

“We’ll be serving about 600 kids total that week,” says Williamson. “This Mexico City trip is actually the first one where we’re taking a team to serve children who are part of our long-term programs.”

Williamson is referring to Buckner’s Family Hope Centers, which take a more holistic approach to helping orphans in the name of Christ.

“We’re trying to more holistically provide for the families so that the kids are able to stay in their families, instead of having to go and live in an orphanage,” she explains.

“There are all sorts of services provided by social workers who work there year-round with families in poverty-stricken areas,” says Williamson.

During the trip, Buckner’s team will also give shoes and the love of Christ to orphans in a government facility. Williamson says they’ll be handing out their three-millionth pair of shoes on the trip.

“These shoes that we’re delivering are meeting a physical need for these kids, but they are [also] opening that door for us to be able to share the Gospel,” she states. 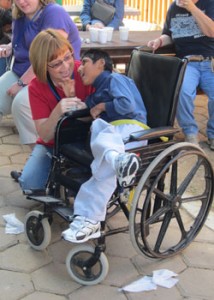 “This boy whose feet I was washing is not only an orphan, but an orphan with disabilities. He has been completely rejected and cast aside by this world and by his own family.
Suddenly it hit me that this boy is going to be chosen to be first in the kingdom of heaven, and I realized what an honor it was to sit on my knees before him and serve him by washing his feet.
Instead of rushing through it like I may have done before, I started washing every inch of his feet and made sure to clean each little toe.” Amy Kraus, shoe trip volunteer
(Photo, caption courtesy Buckner)

Team members get to connect with kids individually while fitting them with a brand new pair of shoes, but they also demonstrate Christ’s love in a corporate manner. Williamson says team members will help share the Gospel in different group settings.

“We have recreation time and craft time, Bible stories–just all sorts of places where people can fit in based on their level of interest,” says Williamson.

“Right now, we actually don’t have too many people signed up, so we’re hoping for at least 10 more.”

Get in touch with Williamson by emailing shoes@buckner.org. If you’re not able to go, surround the trip in prayer.

“Our biggest prayer requests are that the kids we serve would come to know and experience the saving grace of Jesus Christ as their Savior and their Father, and that they would come to know Him through our team,” Williamson says.