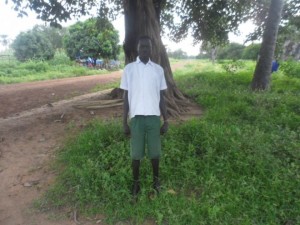 South Sudan (MNN/BGR) — The conflict in South Sudan is complicated. It is equal parts tribal, resource control, and sectarian.

Fighting has displaced nearly 620,000 people. Jeff Palmer with Baptist Global Response asks, “What does that do in terms of limiting opportunities for future life? How do you ever recover from that? That’s the crisis that we’re seeing now in South Sudan.” The problem is that the fighting has seriously hampered the “protection of children, increasing their vulnerability dramatically,” notes a new United Nations report.

Displacement has an unfavorable effect on childhoods, emotionally and physically, says Palmer. He goes on to say, “When they turn into these year-long and even decades-long things, then you have needs of education and jobs and stability and all kinds of things.” It alters a child’s life trajectory. Consider children who lose the opportunity for education during war, children who are forced to move into refugee or displaced person camps. They may wait for years for normal life to resume–if it ever does. “Now you’re having generations of children that are basically displaced, with their families, some of them without their families, and basically having trouble finding a way to get an education.” 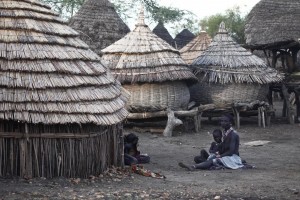 Without an education, displaced children are far more at risk, Palmer says. “They have the possibility of being radicalized. They have the possibility of being exploited because of economic needs of the family. So you just lay out the whole ball of wax of social issues and the horrible things you can think of, and that’s a lot of the future that many of them have to look forward to.”

The trouble is: it’s not safe enough for classes to be held in parts of South Sudan. In fact, the UN humanitarian office in South Sudan reported 88 schools have been overrun by soldiers or are being used to house the Internally Displaced Peoples (IDPs). Others have been abandoned to the destruction of war or natural disaster.

And yet, there are students eager to learn. In a recent BGR story, a sixth-grade boy, Abraham Panyar, stood under a tree in Paloch, South Sudan, prepared to ask BGR partner Living Waters Community Transformation, Inc. for help.

LWCT ran a school in Akot, South Sudan, which Abraham and his friends used to attend before violence increased between local gangs of youth in early 2014. Many students’ families had to flee 20 miles to the town of Paloch. Abraham’s family left, as well, which meant he couldn’t move on to the sixth grade.

After a few months, LWCT staff traveled to Paloch to assess the needs for displaced families. When the students heard they were coming, Abraham and his classmates organized a meeting and invited the visitors. They wanted to make their need known.

“We are called students of Voice of Hope Primary School,” the boy continued. “We have lost direction and hope for the future since we were here without studies.”

Although two teachers fled with this group of families, students hadn’t been able to attend proper classes or eat the BGR school lunches that kept them nourished. The teachers held daily devotions and taught students as much as they could. But, without books and resources, they couldn’t provide real education.

The students began sending messages to LWCT, begging for school. They organized the meeting and appointed Abraham as their spokesperson. The boy wrote a letter that made his point clear.

Palmer says that letter sparked a search for teachers, cooks, and textbooks to send to the school. “We’re partnering with some really good folks on the ground there, providing some schools for displaced people in a couple of areas. We’re working with at least 2-3 schools that are mainly in displaced areas, helping with 500 students.” 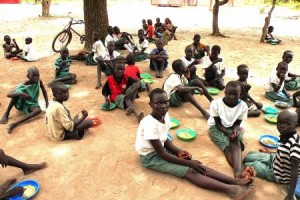 BGR came alongside to provide the meals–another key component to a learning environment. “Nutrition equals school attendance. It’s probably the one good meal of the day that they get,” explains Palmer. “Also, nutrition not just equals school attendance, but [equals] attention span and ability to be in school.” He adds that school attendance then translates to “hope for the future.” “It also provides that avenue for us to insert Christian values and the Gospel in the lives of those students who have been helped–displaced and now are back attending school.”

There are many ways to get involved. The first line of defense is prayer. The second is giving. If you want to explore more opportunities to make a difference, click here.