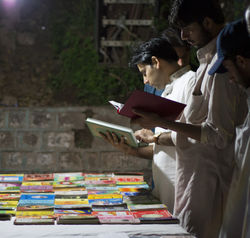 Pakistan (MNN) — Poverty is the main weakness of Pakistani Christians. Pakistan Christian Post reports that influential Muslim men seized and bulldozed the homes of seven Christian families in a village of Kasur.

They threatened to kill them and forcibly threw out the families’ belongings on the road. These Muslim men gave the affected families one option to take back their homes and land if they convert to Islam.

Although this is tragic, and more and more Pakistani Christians are being persecuted every day, there is hope, and God is still working.

The Operation Mobilization Pakistan team shares with people about God in towns and market places, while also distributing literature that talks about how they can have a relationship with God’s Son.

One man took a leaflet. He read it and re-read it, but it did not satisfy him. He wanted to know more about the God who wants a relationship with ordinary people. So he began to search for others who knew this God.

“Please, can you tell me more about this Christ person?” he asked anyone he thought might be able to answer his question.

He received a variety of reactions from those skeptical that there was such a person. Certainly, his family couldn’t answer his questions, even though they were religious. But it did not put him off; he continued to search.

Then he met believers in Jesus. They had a personal relationship with God and seemed to know Him the way the man hungered for. It excited him, and his questions poured out.

They began to meet regularly, and soon the man learned a lot about Jesus and salvation. He read the Bible for himself and accepted Jesus as his personal Savior and Friend. As his faith grew, he made a public step of faith by being baptized as a Christ follower.

However, others in his village were concerned with his new faith. They went to his father and complained that his son had become a believer in Jesus. What was he, an imam–a Muslim religious leader–going to do about it?

“My son is adult and mature; he is accountable to God for his deeds, just as I am accountable to God for my deeds,” replied the father. “If he has become a follower of Jesus, he will have to give an answer to God why he did this. However, I can see he is not stealing things or not doing adultery; he is not doing any wrong thing to create problems for others. He knows what is going on, and his God knows it, too.”

The father’s peaceable reply left the complainers speechless. Soon everyone in the village knew the man had become a follower of Jesus, but no one disturbed him, leaving him free to practice his faith and fellowship with a local OM team.

As the man grew in faith and understanding, he told others about God, about Jesus and salvation.