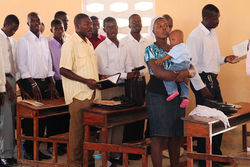 Haiti (OM) — Haiti is a Caribbean island nation with some of the most beautiful tropical beaches in the world. It is also the poorest country in the Western Hemisphere, with its people living for generations under the control of voodoo and spirit worship.

That is starting to change as the power of the name of Jesus sets Haitians free from voodoo and gives them freedom and hope for the future.

Pastor Marc-Hancy Saint Charles was an Operation Mobilization missionary who served on the OM ships and in France before returning to his native Haiti. He prayed for OM to come back to Haiti for 17 years, and through earthquake relief efforts, his prayers were finally answered.

Pastor Marc planted a church in Merceron, a rural village that for many years had been a stronghold of voodoo worship. Tragically, Pastor Marc was killed in a robbery two years ago. Yet the church and other development projects he started continue to grow and thrive.

Pastor Marc was instrumental in bringing the church, a school, and a chicken business project to fund the school in Merceron. He visited many voodoo priests in their homes and prayed for them. One older man finally chose to accept Jesus Christ, renouncing voodoo after a lifetime of serving evil spirits, and many other people in the community soon followed.

Now, two years after Pastor Marc’s death, the church is packed to overflowing. Just last month, another voodoo priest left the area and 10 of his followers came to the church and accepted Christ. The church is working to acquire funds to build their own church building and expand their current projects for greater impact in the community.

“This is a great victory for the community,” said Adner Raymond, a Merceron church leader who was discipled by Pastor Marc.

Pastor Marc also had a vision to mobilise the Haitian church into missions, and now his prayers are becoming a reality.

Six Haitians have joined OM full-time this year, and OM has a vision to send even more missionaries around the world, especially to French-speaking North Africa.

Ruth is a nurse with a passion for HIV and AIDS awareness and prevention. She is also a new OM missionary from Haiti, who is raising support to travel to schools and communities around Haiti, providing education to those who are still greatly affected by stigmas and lack of knowledge. HIV and AIDs is a big problem in Haiti and is on the rise.

“I wanted to go to people and teach them more about HIV and AIDs and also about Jesus,” Ruth said. “I want to go all over Haiti, I want to go school to school, mountain to mountain….I really like that, and I wanted to be a nurse-missionary!”

There are many Haitians who are excited about missions and want to make a difference, yet struggle to raise the funds necessary. But they persevere, determined to overcome the many challenges to serve in whatever way God calls.

“We have been receiving for a long time,” said Ludwig, a Haitian who leads OM’s ministry in Haiti. “Now it is time to send out with the Gospel so others can be saved.”