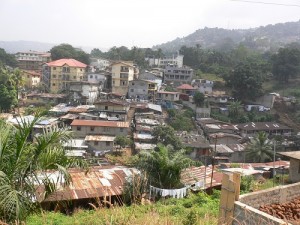 Sierra Leone (CBI) — Although the Ebola crisis has faded from news headlines, Crossroad Bible Institute campuses in West Africa continue to reel in the wake of the devastating epidemic. The numbers alone are staggering: so far, over 8,000 people have died in West Africa, with 3,083 of those deaths occurring in Sierra Leone.

These statistics hit close to home when CBI recently received an update from CBI Sierra Leone’s campus director Lahai Kargbo. “Since the outbreak of the Ebola virus, life and situations have been really difficult on us here,” Kargbo said. “I am thankful that the Lord has kept me up until this day to serve Him in whatever opportunities He has for me.”

Moreover, Kargbo reported that the crisis has left his country at a standstill: the government has temporarily shut down public services, businesses, and Internet cafés, which complicates everyday tasks like visiting family or accessing e-mail.

However, Ebola’s tragic impact has been far more irrevocable. With great sadness, Kargbo reported that four CBI Instructors have died of Ebola since the outbreak, as have three members of Kargbo’s family.

This heavy news comes on the heels of an update from CBI Liberia’s acting director Jacob Vambo, who likewise noted Ebola’s dire effects at both the national level and the local level of CBI’s prison ministry.

“As members of the body of Christ, our hearts lament over the hardships and the deaths of loved ones that CBI Sierra Leone has experienced,” said CBI’s international coordinator Jacob Busscher. “Even though updates on the Ebola crisis may not be on the front page of our newspapers, the CBI family around the world cannot forget to pray for Kargbo, Vambo, and all of the West African students and instructors still immersed in this crisis.”

As you pray, explore ways you can help Crossroad Bible Institute from your own home. Click here.