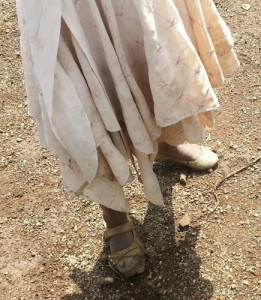 Ethiopia (BOC) — Editor’s Note: What follows is a blog post about Buckner International and one of their larger outreach efforts, Shoes For Orphan Souls. In 2006, Buckner was called to expand its African ministries, and Ethiopian President Wolde-Giorgis openly welcomed Buckner to aid his government and people. Buckner has continued to expand services in Ethiopia which now include adoption, foster/kinship care, a Family Hope Center, vocational training, formal schools for elementary age children, and medical clinics.

The Buckner nongovernmental organization (NGO) in Ethiopia was officially formed in January of 2007 while merging with the Bright Hope Organization. Moges Feleke serves as the country director for the Buckner NGO in Ethiopia.

Haley Radeka went to Ethiopia earlier this year on a shoe delivery trip with Buckner Shoes for Orphan Souls and wrote about her experience here.

In the following excerpt from her original blog post, she reflects on seeing the joy in children’s faces when they realized they mattered to someone:

I was in the group with the youngest kids, all about 4-6 years old. We gave them coloring sheets and crayons and let them color their little hearts out. After about a minute of coloring, each kid would hold up their drawing and yell “Miss! Miss!” until you acknowledged them.

When one kid did, the next immediately followed. They would yell to get our attention until we specifically addressed how amazing each painting was. Our translator taught us to say “Gobez!” which means “good job” and “looks great.” After another minute of coloring, the cycle would start again. Each one just wanted to be reminded over and over that they were doing it right and that we loved their masterpieces. 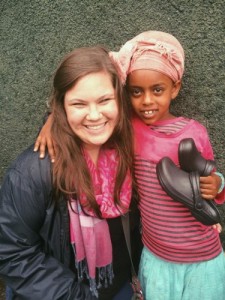 We broke for lunch and came back to our same groups to pass out shoes. I will never be able to describe the moment of cleaning a child’s feet and putting on a new pair of socks and shoes. It is so tender and beautiful and heart wrenching all at the same time.

The school collected the shoes’ sizes ahead of time so all we had to do was pick a pair and match them to a child. As we began and they started to see what we were doing, the shouting of “Miss! Miss!” started again.

As we moved from child to child, I could see the panic in some of their eyes that their turn never would come. The joy that the last few children expressed as they received their new shoes was an amount of joy that I’m not sure I’ve ever felt before. They realized they were not forgotten about and that they too would receive a new pair of shoes.

As 2014 comes to a close and you begin making plans for next year, take some time to prayerfully consider whether God is calling you to serve orphans and vulnerable children through a shoe delivery trip.