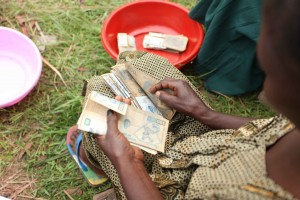 (Photo courtesy Food for the Hungry)

Thailand (FH) — There is, perhaps, no story that reflects the true spirit of Christmas more than the one found in Mark 12:41-44, the story of the Widow’s Mite. The key to the quality of her giving was summed up best when Jesus said, “The others gave out of their wealth, but she gave out of her poverty.” Frequently, we look at our financial situation and feel that the paltry amount we might be able to give would be meaningless, unable to bless anyone. The truth is: what we give may bless people in ways we have never even considered.

Working in Asia during the aftermath of one of the world’s most horrific tsunamis of all time, Food for the Hungry (FH) staff were greatly moved by the church in a small agriculture town in northern Thailand. Members took up an offering to help those in need and collected a grand total of $7.00 and a dozen of eggs.

They weren’t worried about what they didn’t have; they gave what they did have! To those individuals who were putting in 20+ hours a day helping those victimized by the tsunami, the gift of eggs impressed them more than the five-figure donations they received from others.

While we may be able to give only a little, FH is blessed by the cumulative effect of dedicated people who give all they can. Together, you provide much more than you may have imagined.

And, if you prefer to give a tangible gift rather than money, take a look at Food for the Hungry’s Gift Catalog. It contains much-needed items that will bless others while fitting into even the tightest of budgets, including:

1. Mosquito Nets: For only $6.00, you can help protect a child from deadly malaria-bearing mosquitoes and a host of other creepy crawlies.

2. Hope Packs: Your gift of $4.00 will provide a student with school supplies, including pens, paper, notebooks, and other items that will allow children to develop their God-given skills and talents.

As we prepare to share the Christmas season, let’s take just a moment and share our comparative bounty with those in parts of the world who have so far less than we do!