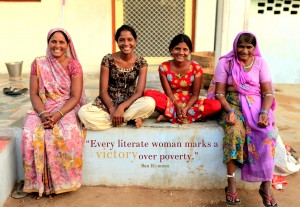 India (MNN) — Many women in India are treated like second-class citizens and are considered a burden to their families.

“She Counts 2015” is introducing a new message to India’s women–one of hope.

Of Bihar’s 104 million residents, one-in-three are illiterate and 47% of women in Bihar can’t read or write. Without other ways of supporting themselves, 60% of girls in Bihar marry by age 18.

Illiteracy touches every moment of every day, as it is impossible to successfully get through life without being able to read, Ackerman says.

“When your kids come home from school–if they are lucky enough to go to school–and they don’t know how to do their homework, you can’t help them,” she explains.

Mission India’s goal for She Counts 2015 is to raise $63,000: enough funding to send 2,100 Bihar women to their Bible-based Adult Literacy Class.

Right now, a matching grant doubles every dollar given to She Counts 2015. 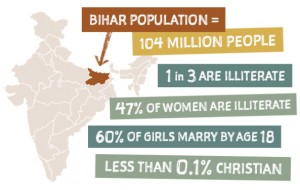 Mission India’s Adult Literacy Classes don’t just teach men and women how to read and write. They also learn about health, hygiene, basic first aid, and what it takes to start their own business.

By the end of the one-year course, Ackerman says, students gain the equivalent of a fifth-grade education.

“When the students graduate, they have the minimum requirement for a job and are able to apply for jobs they couldn’t apply for before,” she adds.

There’s a spiritual component, too. Many women discover for the first time that they are valuable in the eyes of God.

On Mission India’s blog, you can learn more about the impact of She Counts 2015.

This is Mission India’s second “She Counts” campaign; their first one was in 2014. By sharing about the plight of women in India, Mission India was able to raise $43,170 and help 1,439 people.