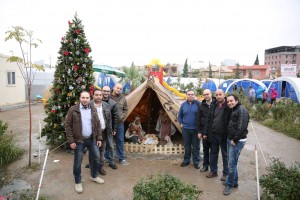 Lebanon (SAT-7) — Middle Eastern Christians chased from their homes are now refugees in neighboring countries. Fear and violence drove them to such places as Lebanon, Jordan, northern Iraq, and Turkey. After nearly 6 months of running from ISIS, their lives are forever changed. Across the Middle East, you can find rows of tents, covered with plastic and burlap bags, sheltering millions of Iraqi and Syrian refugees.

Recently, a SAT-7* team visited one of these camps in Lebanon and met a little boy, *Annas. One member of the SAT-7 Audience Relations team reported, “Annas was very shy. He seemed so lost in his soul. He told me how radicals had gunned down 16 members of his family before his eyes. Annas was hit in the shoulder. He fell to the ground and pretended to be dead for hours, until he knew it was safe.” 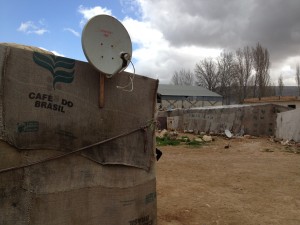 Many of the children who now live in refugee camps have been through terrible circumstances, but hope shines through. Although they are far away from their homes, most refugee children know about SAT-7 and have access to satellite television. It is very common to see lines of refugee tents with satellite receivers on the roofs.

To millions in the Middle East, SAT-7 is a lifeline, connecting Christians with their homeland and their people. For isolated Christians, SAT-7 may be their only source of teaching and fellowship. SAT-7 brings news of current events to displaced families and is a safe place for kids, bringing HOPE to all.