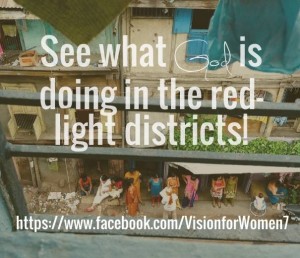 Nepal (MNN) — Most people don’t even want to imagine a world in which a woman could force her niece to sell sex for money–right in her own home. But this practice isn’t too out of the ordinary in Nepal. Tighter border control into India has caused a spike in sex-trade activity in the country. Red-light districts and brothels have sprung up at a quick rate.

But hope is not lost.

Vision Beyond Borders is calling for change: change for the victims of sex-trafficking, change in society, and even change in you and me.

They recently moved their safe house and the 30 women living there. The landlord did not agree with their work of rescuing women from the red-light districts.

The move did not come without blessing, however. Patrick Klein of VBB explains, “We’ve moved to a bigger place, and just in the last 5-6 weeks, we’ve rescued five more girls. The last girl we got out is a 14-year-old.”

This 14-year-old was the girl forced into prostitution by her aunt.

Rescue from sex-trade and human trafficking is not VBB’s end goal. They’re doing their part to restore God’s creation by giving the women the chance to live a good life and to learn about Jesus.

VBB reaches out to the girls through a hair salon. Over time, they develop relationships with the women and share the Gospel with them.

Total transformation for the victims

Many girls accept the helping hand of VBB to get out of the red-light business–even if they aren’t so sure about Jesus yet. When VBB can–that is, when they’re not full to capacity at the safe house, the women are taken in. Klein says there are currently 25 women waiting for room in the safe house.

Each morning the women have a Bible study and discussion time. Through hearing of the Bible, many women give their broken hearts to Jesus. And the steps they take beyond that are simply amazing.

“When they come to Christ, then they find forgiveness for their sins, but then they’re able to forgive those that have abused them. It’s been amazing to see God really working to transform these girls,” says Klein.

In the afternoon, the women are taught skills that enable them to make a living. These skills vary from tailoring to hair cutting–even driving rickshaws!

“We want to give them skills so they’re not tempted to go back to their former lifestyle, but they can actually go out on their own and do something with their lives,” Klein explains.

Some of the women are starting their own shops, trusting God to guide them to what He has next for them.

It’s not just women taken out of brothels and similar situations that are being rescued. Even the most unexpected individuals are turning from their lives in the sex trade to follow God.

Klein shares this story from India: “A lady that was a brothel owner in India: she was the wealthiest woman in the red light district. [She] heard the Gospel, and got saved. She actually closed all three brothels that she owned and told the girls, ‘Your debts are paid. You are free to go.'”

A VBB contact has started a Bible study with four more brothel owners in India.

The change can’t start and stop with the sex-slave victims and the people who hold their “debts.” The hearts of those purchasing sex and creating the demand for this exploitation need to change. But there needs to be help from the community, too.

Klein explains what it looks like now: “There’s a real stigma in society, and they really look down on these girls as low-class trash. So we’re trying to work to change that, for people to understand, first of all, that these are not prostitutes: these are sex-slaves. They are forced into this lifestyle. It’s not something they choose; it’s something that’s forced upon them.”

This explains why the owner of the first safe house kicked them out.

Transformation of you and me

Whether we take big steps or small, this situation calls for a change in all of us. The change is simply to move from standing still to doing something to effect change in Nepal and India.

That step can be as simple as a prayer. Klein gives a good example of how to pray.

Another way you can help is through monthly donation–even if it’s just $10. The safe house costs $3,500-4,000 a month to keep running. If you  want to help with that, click here. Use the memo to designate your gift for the safe house in Nepal.

Klein reminds us why they do it: “When [the women] come to know they’re created in the image of God and that He loved them enough to send His son, Jesus, to die on the cross for our sins, they want out ,and they start to see, ‘Wow, I’m created in the image of God. This is not what God wants from me.’ It’s exciting to see them being transformed and to see the joy in their faces when they worship the Lord: their hands are raised, tears are streaming down their faces. They’re so grateful to God for what He’s done for them.”