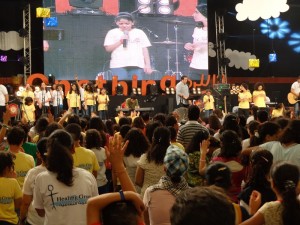 Iraq (MNN) — “They’re not going to school. They’ve been uprooted from their homes. They don’t know maybe where their parents are. They don’t have any sense if they’re even alive.” Speaking of children, Dr. Rex Rogers, President of SAT-7 USA, a Christian satellite television ministry to the Middle East and North Africa, says they are the ones most affected by ISIS attacks.

More than ever, children–and their parents–need a message of peace. This message is being aired on SAT-7 24 hours a day, on 6 different channels, in three different languages: Arabic, Farsi, and Turkish. SAT-7 programming is produced by Middle Easterners, for Middle Easterners.

Rogers says, “We broadcast who we are. We share Christ and Christianity. We talk about human rights, like liberty and respect for property, respect for religious worship for all people. And we try to reinforce values of peace or dealing with conflict in a different way other than violence.

In the Middle East, watching television is a family event. “All of our channels use every kind of television program or genre that you can think of that are legitimate–game shows or drama or movies.”

SAT-7 KIDS programs creatively touch the hearts of children through sing-a-longs, puppet shows, and bedtime stories. Children and their families learn the truth of Christ as presented in the simplicity and animation of children’s programs.

Pray that SAT-7 will continue helping families and providing hope across the Middle East.