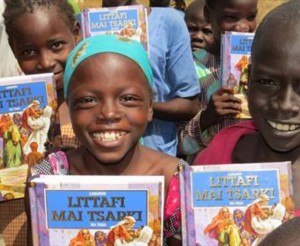 Nigeria (ODM/MNN) — The Islamic terrorist group Boko Haram is wiping out entire communities in northern Nigeria. The violence has led to a major humanitarian crisis.

Due to lack of access to areas controlled by the fighters and conflicting reports from witnesses and the Nigerian government, no one knows just how many people are killed in Boko Haram attacks.

The government’s National Emergency Management Agency (NEMA) estimates that fighting has displaced 1.5 million people within the country. Among those affected most adversely are children, women, and the elderly.

The effect of the violence on children has been particularly heart-breaking to Open Doors workers. One such group of children are those Open Doors workers met during a visit to a refugee camp in Yola. Local church leaders estimated that around 1,000 children were separated from their parents when Boko Haram attacked Mubi in southern Borno state and various other towns last fall.

Open Doors met with16 children who had lost both parents. Open Doors researcher Isaac could hardly hold back his tears when he met with them. It was not easy to see them in those circumstances. Recently he returned to the refugee camp to see how they are doing.

“The challenges facing these children are numerous,” he states. “They do not know what to do or whether their stay in the camp will continue or what will become of them once they leave the camp. Unfortunately, the government does not have a formal plan in place to help them. But beyond the immediate and longer-term concerns over food and shelter, these children also still have a long emotional journal ahead of them as they come to terms with their loss.”

Open Doors will be supporting children with emergency relief such as clothing and bedding. During his recent visit, Isaac also delivered 100 children’s Bibles.

Isaac says: “In a very short time, every child that received a Bible found a place to sit and page through the beautiful pictures in the Bibles and started reading some of the passages.”

One child’s response: “Wow, I am so happy to receive a copy of the Bible today. I had been asking my father to buy one for me when he was alive, but today I received it. I will learn how to trust in God through this Word of God. I am so happy.”

Pray for the hope of Christ to impact and change these young lives.

Click here for more information on helping Christians in Nigeria.