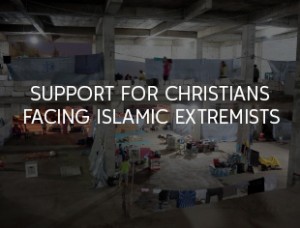 Niger (MNN) — There are 1,5000,000 IDPs in Nigeria that have fled from the brutality of Boko Haram. Thousands have become refugees by running to other countries for protection.

But what happens when those countries deny them?

After Boko Haram massacred thousands, Nigerians sought refuge in neighboring Niger and on islands in Lake Chad. According to a January UNHCR report, there are around 16,000 Nigerian refugees residing there.

But now, Niger is deporting them back to the war zone that is their country.

These refugees are seemingly unheard as they cry out for help. But Voice of the Martyrs USA is giving support that meets both physical and spiritual needs as refugees’ lives are flipped upside-down once again.

CNN reports Niger is deporting refugees because the military will be carrying out an operation against Boko Haram.

“People’s livelihoods have been destroyed because they have been told’ you can no longer live and work on the lake,’ and now they are told, ‘OK, but in any event, we’ll take you back to your country,’” said Niger Representative for UNHCR, Karl Stenacker.

“So they say ‘yes’…. What other options do they have? Even if they are migrants, the question is: is it appropriate to send them back, and is it the right way its being handled? I guess in both cases it is no.”

Some of these people have been living on the islands for years. They have grown accustomed to and found familiarity in their everyday lives. Now, they’re uprooted…again, with short notice. According to CNN, 6,000 refugees have already been sent back to Nigeria: 3,000 were rushed back in the span of one week. Breitbart reported refugees were told to leave and didn’t have time to collect any belongings.

Moussa Tchangari, head of Nigerien NGO Alternative Citizens’ Space, told DW in an interview, “Nothing was organized. The government issued a kind of threat saying that whoever does not leave the islands by Monday evening will be regarded as a Boko Haram member or sympathizer.”

Many were forced to go on a three-day walk to get to the border where trucks were picking them up. According to Breitbart, around 50 perished from starvation and dehydration.

Refugee Nura Auwal told US News, “There was no water. It was very hot. They collapsed and died. Nobody had any energy left to help them, and we just had to leave them in the bush.”

While multitudes are suffering and grieving in the deportation, many more are terrified to go back to their original country, afraid of what they might find. “I’m expecting to go back soon, but the problem is the roads. Boko Haram has vandalized everything,” refugee Fanta Adamu told The Guardian.

“I’m expecting everything to be bombed. We are afraid to go back.”

Like the Israelites wandering in the desert, these refugees have nowhere to go, and nowhere to turn.

While they work, they could use your support to provide for the overwhelming needs. Click here to help!