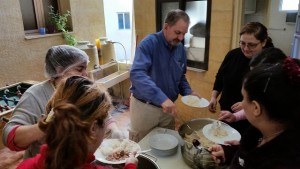 Middle East (MNN) — On Wednesday, thousands of refugee families huddled together in their tents and scrap material homes during a rare and harsh snowstorm in the Middle East, leading temperatures to be around zero degrees.

So far, The Weather Channel reports Israel, Syria, Palestine, and Lebanon have been hit the worst.

During the storm, the Red Cross reported a Syrian man, Ammar Kamel and a 7-year-old boy, Majed Badawi, had died.

A security source told AFP the two were hiking across the mountainous Syrian and Lebanon border and were found in the Shebaa region in Lebanon. The refugees would have faced temperatures as low as -20 degrees Fahrenheit.

The Weather Channel said at least three others were injured in the storm, and thousands were left without power. According to DailyMail.com around 9,000 in Israel lost power. Schools scattered throughout the Middle East were closed on Wednesday, and many government officials couldn’t make it in to work due to the rugged conditions.

Mohammed al-Hussein, a refugee in an east Lebanon camp, told DailyMail.com, “I’ve been a refugee here for two years, but this is the worst winter I’ve seen.”

The snowstorm has shut down an airport in Israel, and flights have been delayed. Many roads have been cut off, and access into refugee camps is becoming nearly impossible.

According to The State, refugees in Syria had to use brooms and sticks to scrape snow off their tents, fearing they might cave in under the weight.

DailyMail.com said prior to the storm, United Nations Refugee Agency gave out cash and fuel coupons to over 80,000 refugee families in Lebanon. However, “There is a lack of food and heating materials. We are asking charities to intervene,” reported a refugee.

Global Aid Network staff is working with refugees who have been traumatized and continue to suffer. GAiN is building relationships and showing the love of God as they distribute supplies fairly and equally.

They are collecting funds for basic needs like food, clothing and medical supplies. Also, they need donations to provide tents sturdy enough to hold up against the rest of the winter. Each tent will be equipped with a heater.

Can you show the love of God to families by giving them warmth and food? To donate, click here.