Ukraine (SGA) — On October 26, Ukrainians went to the polls and elected a new parliament, although the separatist regions in the east ignored the results and went ahead with their own election on Sunday, November 2. The election didn’t garner much attention in U.S. media, but something remarkable has again taken place. Four evangelical Baptists were elected to the parliament, and pro-Western parties now hold the majority. 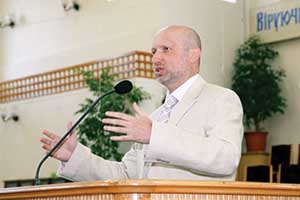 One of the four evangelicals, Pavel Unguryan, wrote to express his reflections on the aftermath of the past several months:

Today Ukraine is going through difficult trials, and despite this, the country has stepped ahead on the path toward purification and recovery. This year, our nation has experienced much suffering and depression, but God has spared us from the worst and has helped us through it all. I am very grateful to the Lord that Ukrainian churches united in special prayer for our country and for the early election to parliament—which is vital for Ukraine.

The recently-created political party called National Front is headed by Baptist minister and parliament speaker Dr. Alexander Turchynov and Ukraine’s prime minister Viktor Yatsenuk. Despite what low exit-poll results showed, the party ranked first among other parties in the vote. God enabled four Baptists to be elected to the parliament from the National Front list. I believe that God has a plan for spiritual renewal in parliament and politics, and has He has allowed me to be reelected.

Since God has entrusted me with this office, I ask you to pray that He will give me wisdom as I lead a prayer group within the walls of parliament. It is a perfect opportunity for politicians to get united around Jesus and to implement His principles through relevant laws, government policies, and sincere concern for the people of Ukraine.

The Situation in the East

A report Sunday in the Washington Post quoted a Ukrainian military spokesman, saying that Russian military support had been flowing into eastern Ukraine in recent days. Also, witnesses on Sunday reported long columns of unmarked military trucks traveling into the rebel stronghold of Donetsk ahead of their separate election November 2. Prior to the vote, Russian Foreign Minister Sergei Lavrov said Russia would recognize the results.

Separatist leader Alexander Zakharchenko won the vote according to Russian media outlet RIA Novosti. After the elections, he said, Kiev “will recognize us, give us our land back without a fight, and we will establish good diplomatic relations.” Zakharchenko is a former electrician at an eastern Ukrainian mine. He took over leadership of separatists in the Donetsk region from a Russian citizen in early August.

It remains to be seen in the months ahead whether a final peace will be established between the Ukrainian national government and the eastern regions. The refugee and humanitarian crisis caused by months of fighting remains, and Slavic Gospel Association continues to help evangelical churches respond through our Crisis Evangelism Fund. The fund helps the churches provide food aid, winter clothing, mattresses, bed linens, and other resources, in addition to Bibles and evangelistic Christian literature. If you would like to find out more or help, click here.