North America (MNN) — If you love missions, you’ve probably heard about the “10/40 Window” — a term referring to countries located between 10 and 40 degrees north of the Equator.

Nearly 100% of the people who live in this region are both poverty-stricken and have no access to the Gospel.

Residents of the “60/70 Window” face a similar dilemma.

Social ills like alcoholism, suicide, and rampant drug abuse haunt most remote villages in the “60/70 Window,” which stretches from Alaska to Greenland. Located between 60 and 70 degrees north of the Equator, the region is also home to SEND International North. 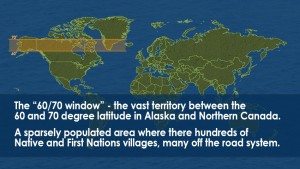 “It’s a fascinating part of the world; otherwise there wouldn’t be all these [TV] shows and people traveling. But how can we use that to turn our focus to the Gospel outreach?”

Rempel and his team are bringing Jesus to remote Native and First Nations communities in the “60/70 Window” of Alaska and Northern Canada. They aren’t the first missionaries to brave this barren terrain, Remple notes, but they face a similar spiritual void.

Churches planted years ago by pioneering missionaries have long stood empty. Generations have come and gone, and the Good News of Jesus Christ has been forgotten.

“Can we bring a Christ-like presence into some of these northern towns, northern villages, where the Gospel is no longer being preached?” Remple asks, knowing his team must somehow answer the question. 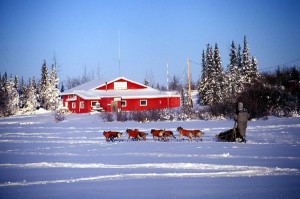 Their mission can sometimes seem as daunting as the Far North’s unforgiving tundra. But, Remple knows his SEND North team isn’t braving the wilderness alone.

As missionaries step out in faith and obediently tell others about Christ, the Holy Spirit softens hearts.

“It’s like you take one step and the door opens wider,” Remple shares. “Our goal is to see partnership develop, to see aboriginal leaders develop, and to see, in the end, spiritual solutions–Godly solutions–to the social ills.”

Next week, Remple and a few teammates are heading to the northernmost tip of Canada for outreach. SEND North recently received word of 23 unreached communities: places where no one’s sharing or preaching the Gospel.

Will you pray for the team as they head into a new mission field?

“We need discernment and wisdom, boldness and courage, as we visit communities that we’ve never been to before,” Remple requests.

3 ways you can partner with SEND North 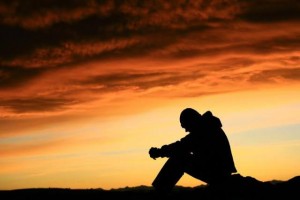 SEND North observes on their Web site, “The spiritual landscape of Alaska and northern Canada can be dark and harsh.” They’ve developed a prayer guide to help believers join them in pushing back the Far North’s spiritual darkness.

“I would love to see us, throughout North America, engaged in a strong prayer movement for the Far North,” says Remple.

Get your “Pushing Back The Darkness” prayer guide here.

“Unreached people in unreached places are that [way] because they are difficult,” Remple observes. 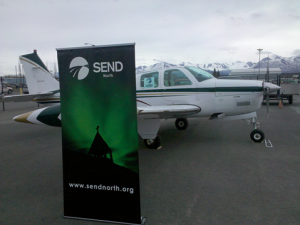 “Life and living in the Far North just take a ton of resources. These are difficult places that we’re talking about; difficult to live [in], difficult to do ministry.”

Transportation is one of the biggest needs in Far North ministry. SEND North currently has 30 missionary families living in 19 villages, and aviation plays a key role in keeping them connected and in expanding the ministry all the way to Greenland.

The fastest and least expensive way to move between these villages is in small private aircraft. The SEND North Aviation Fund is used to cover the all the costs of flying team members around the Far North. You can help a team member or two take flight here. 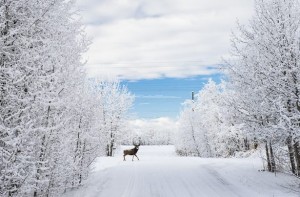 -15 Fahrenheit is the average temperature in Yellowknife during the cold, dark month of January. Pray for hardy missionaries who can live and thrive in these conditions.
(Photo, caption courtesy SEND North via Facebook)

Not everyone is called to serve God in the Far North. But, some are.

“There are individuals who are going to hear or read these words, that God is calling to go into the Far North,” Remple says. “We are seeking to partner with those people.

“How can we help you live out God’s calling on your life to go to a remote, isolated, dark, difficult place and be the presence of Christ in that place, and help bring about transformation?”